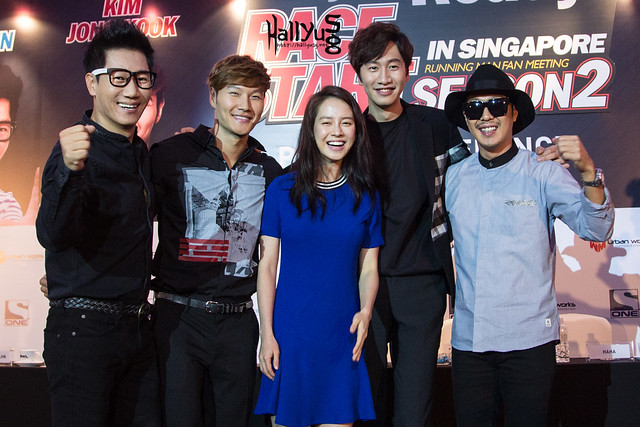 Cast members Lee Kwang Soo, Song Ji Hyo, Kim Jong Kook, Ji Suk Jin, and HaHa (Ha Dong Hoon) shared their experiences being on Running Man and expressed their excitement about returning to Singapore for a second time to meet up with fans. The members’ easy camaraderie and witty personalities created a fun-filled and light-hearted atmosphere throughout the press conference. 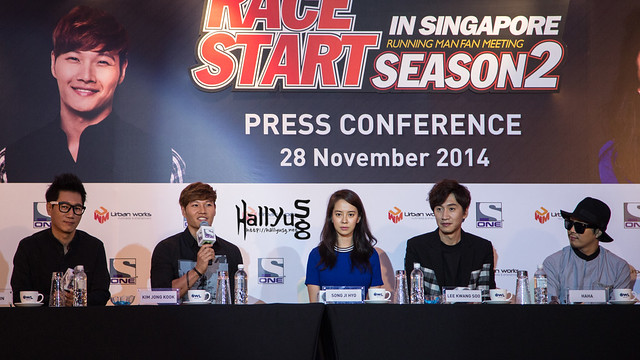 Having been to Singapore before, the Running Man members were asked to share their impressions and experience in the country. Naturally, chilli crab was among the first words uttered by the members in response to the question. HaHa then went on to remark in English that Singapore has a “very beautiful view, very clean streets”. 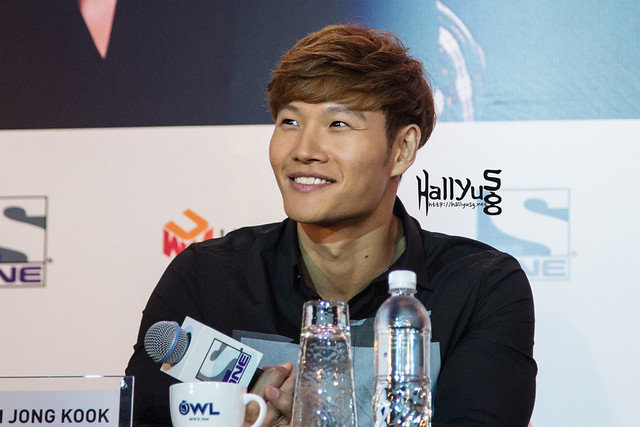 Speaking fluent English throughout the press conference, Jong Kook agreed saying that the weather in Singapore was “perfect”. While Kwang Soo took the chance to thank the fans and hotel staff, saying that fans in Singapore were very enthusiastic and the hotel staff were kind. As Ji Hyo had arrived a day earlier, she mentioned about her pleasant trip to the S.E.A aquarium and Night Safari. 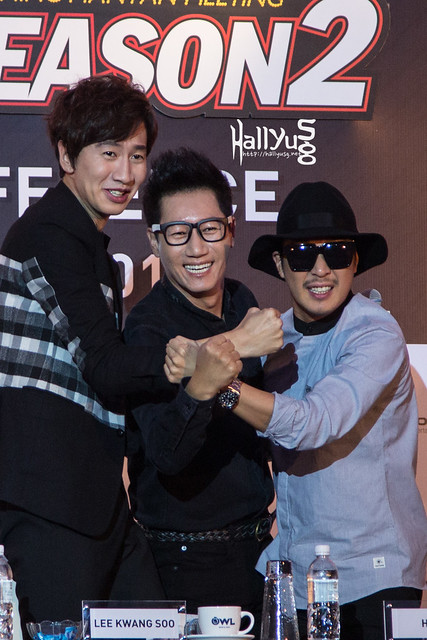 Minutes later, Kwang Soo, Suk Jin and HaHa displayed their close relationship and showmanship through their comedic actions and mini photo-op, sending the audience into laughter as they candidly posed for pictures and even showcased their trademark betrayal trio “Feel, Chok, Cross” pose. 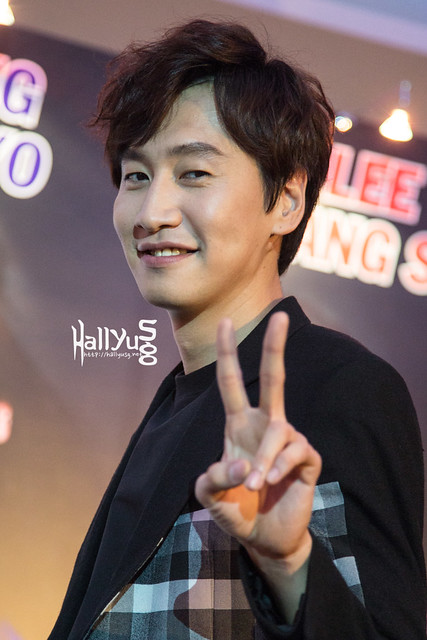 When asked whether members treated Kwang Soo differently after he won the Excellence Award at the 7th Korea Drama Awards for his role in the drama It’s Okay, That’s Love, the members joked that Kwang Soo has since became “super cocky” and that they “can’t even sit at the same table as him anymore” as his entourage now includes over 5 hairstylists, 5 makeup artists and 5 stylists.

Jong Kook and HaHa immediately followed up by pretending to cater to Kwang soo, with Jong Kook pouring him a glass of water as HaHa fanned Kwang Soo’s face and wiped his brow. Kwang Soo played along, sitting back with a look of mock conceit. But all jokes aside, Jong Kook related that Kwang Soo is really “a humble guy” who “isn’t going to change”, laughingly adding that “I’ll hit him if he does”. 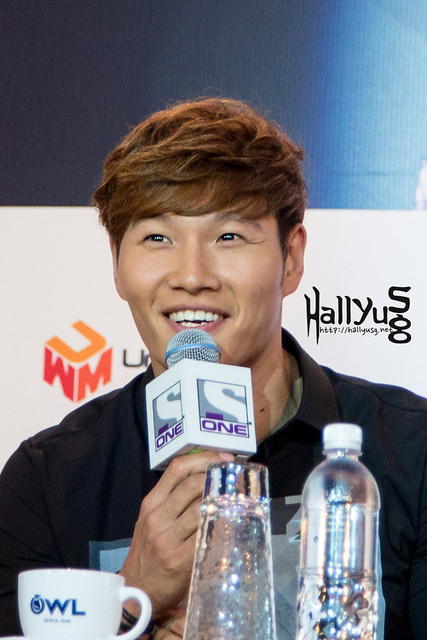 “The Korean Running Man also won during the episode,” he mentioned and continued a bit sheepishly, “it’s a bit childish, but we were quite happy about that too”. 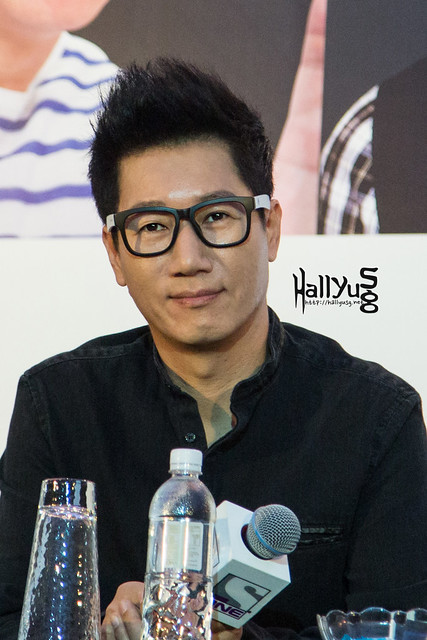 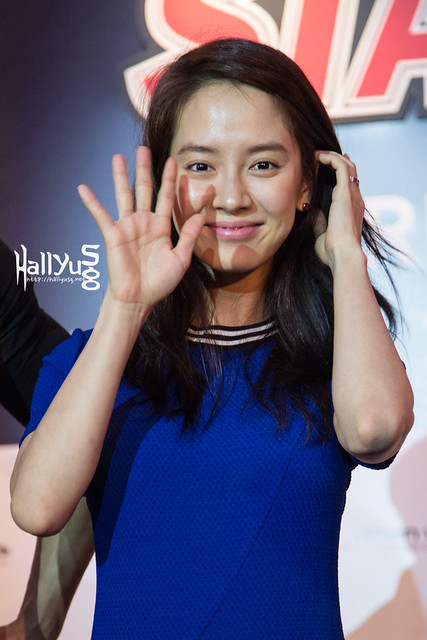 With over 4 years of filming together for the show, a question was put to the members to share their most memorable experiences with Running Man. Suk Jin felt that the episode he enjoyed most was the one with Jackie Chan, as he was their childhood idol. Ji Hyo chose her most memorable episodes as the episodes with no guests and just the Running Man cast. 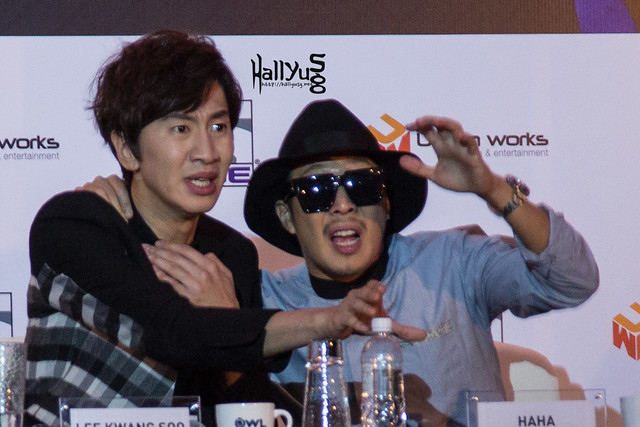 Speaking of memorable experiences, fans of Running Man who have watched their Taiwan Roller Coaster episode (episode 212), would also have seen what a terrifying experience it was for cast members Suk Jin, HaHa, and Kwang Soo.

HaHa agreed, saying that when they have to go one-on-one during Running Man’s nametag tearing game and they hear the name “Kim… Jong… Kook” announced as their opponent, it is one of the most terrifying experiences. Showing impeccable comedic timing, Jong Kook immediately stared in a mock threatening manner towards the media, emphasizing his ‘scary’ reputation on Running Man. 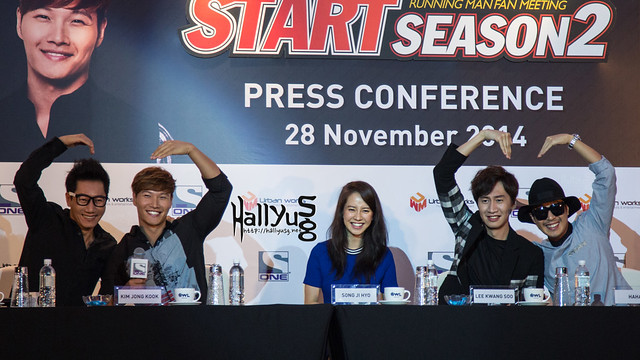 With Singapore being the last stop in their Race Start Season 2 Fan Meet tour, the organizers and cast promised to deliver a fun experience for fans, with performances featuring some of the members’ well-known songs, as well as several other parodies such as ‘Trouble Maker‘. 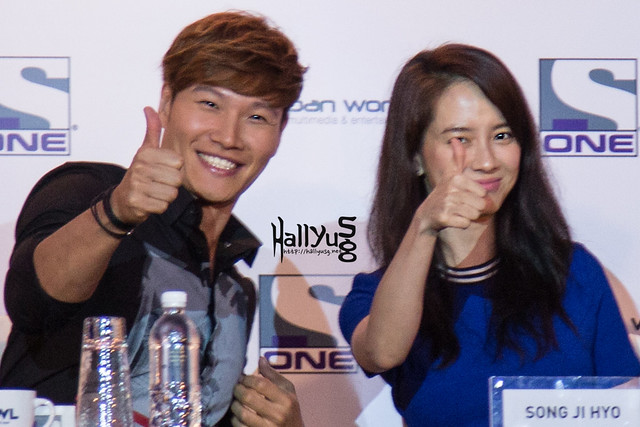 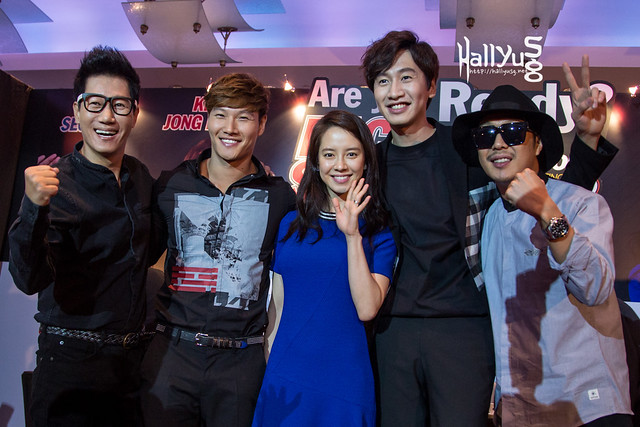 Though the press conference was short, the cast easily charmed the audience through their witty responses, good-natured teasing and humour. With their unique personalities shining through both on and off-screen, it is no wonder that Running Man remains the number 1 show in its time slot in Singapore!

Special thanks to ONE for the media invitation to Running Man Race Start Season 2 in Singapore! Be sure to catch the new episodes of Running Man on Fridays at 11.45pm first and exclusively on ONE. Repeats air on the following Friday at 7.40pm, as well as on Saturdays and Sundays at 11.15pm.

Article by: Cara
Photos by: Nicole

[COVER] Lunafly holds a press conference for their Singapore showcase