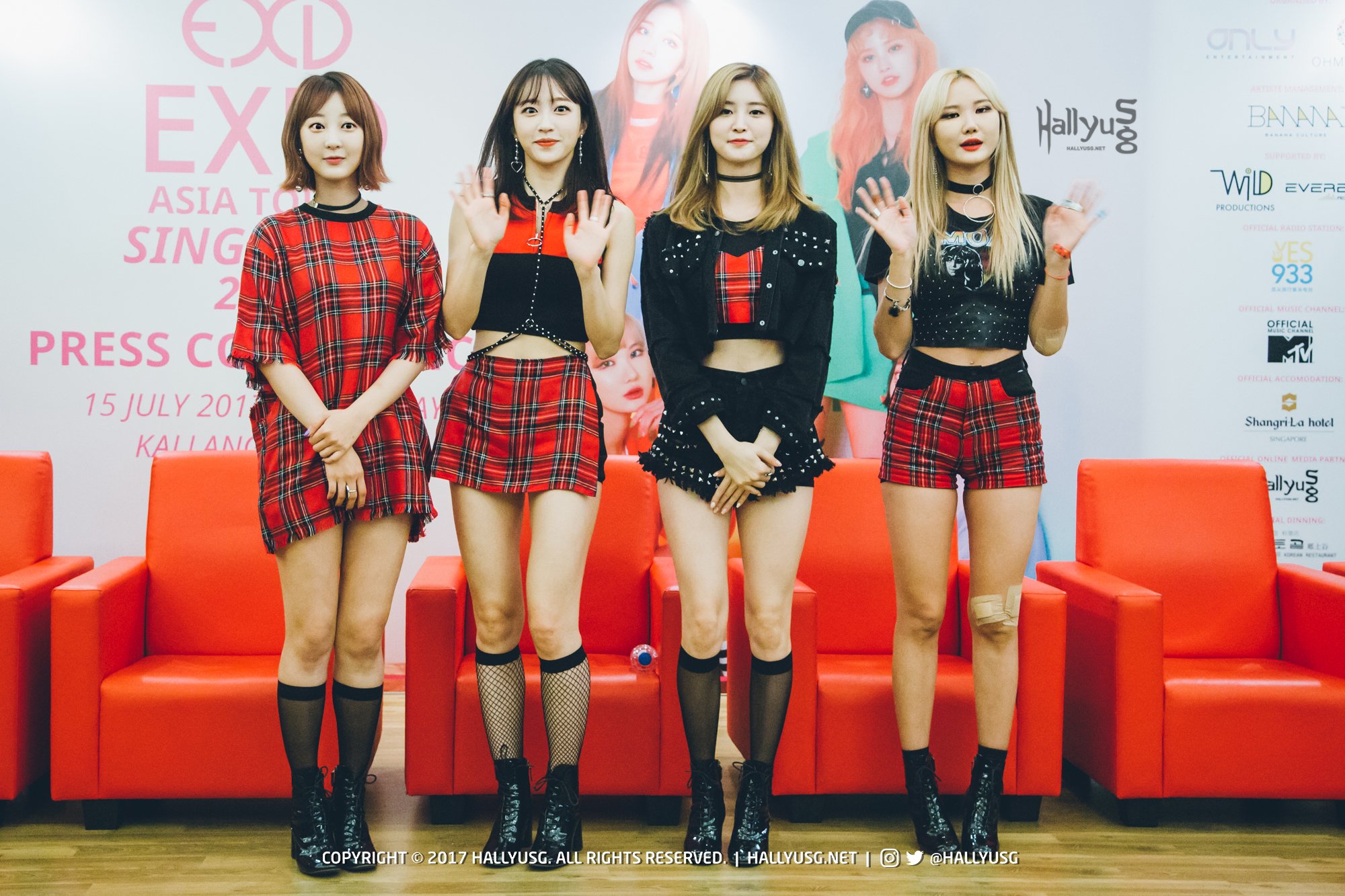 Hani, LE, Junghwa and Hyerin from EXID were in Singapore last weekend as part of their Asia Tour. At the press conference that was held prior to the show, EXID revealed that they have been working hard to prepare for this leg of tour.

Having released their latest album [Eclipse] featuring the title track ‘Night Rather Than Day’, Hani and LE shared that they prefer day time over night time, whereas the other two members are the opposite of them. 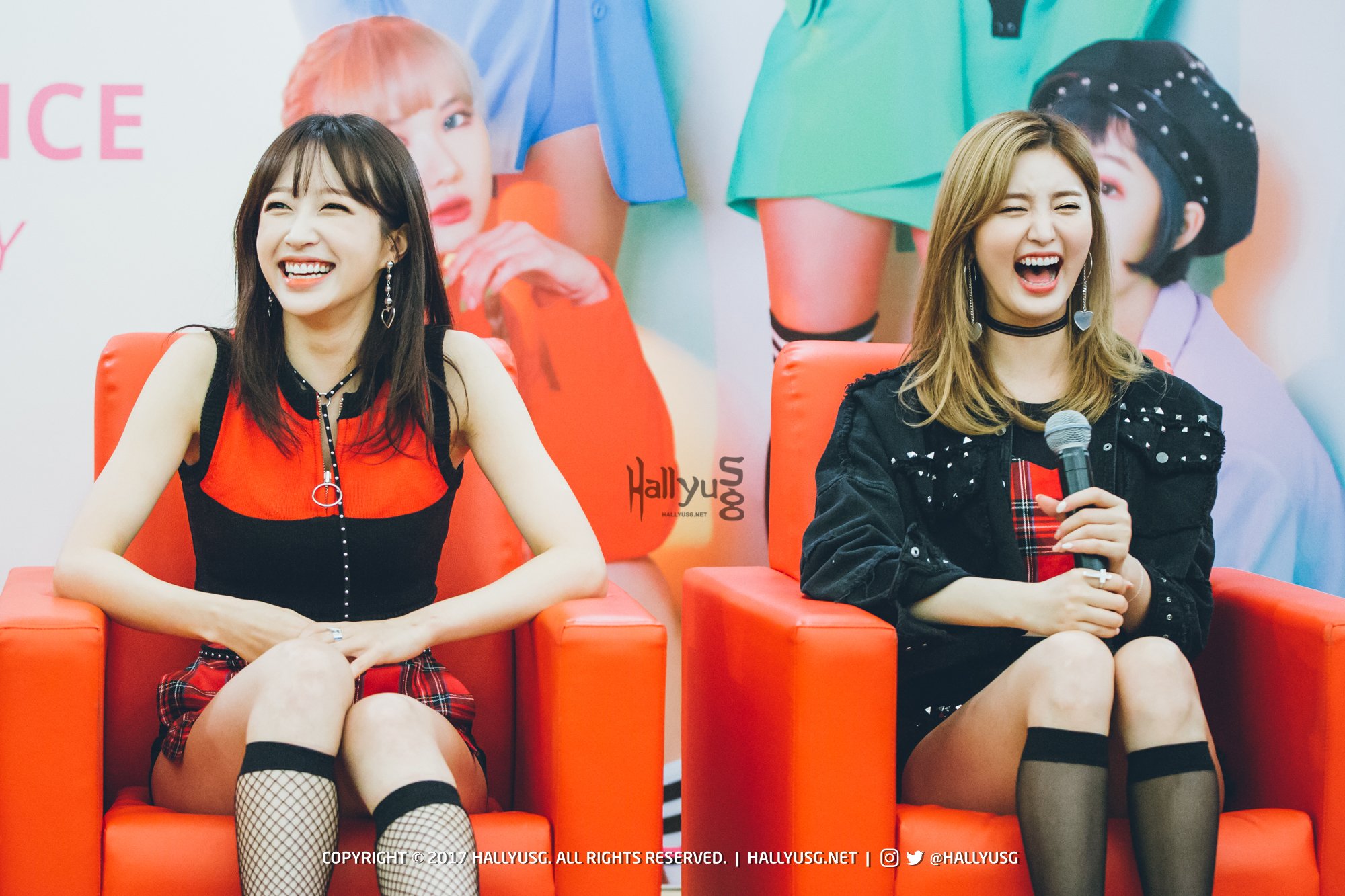 When asked what genres they would like to explore for their next album, Junghwa answered with a laugh, “bright upbeat songs with pink tennis skirts!”. On the other hand, LE wants to do a charismatic duet with Hani to showcase a girl crush image. 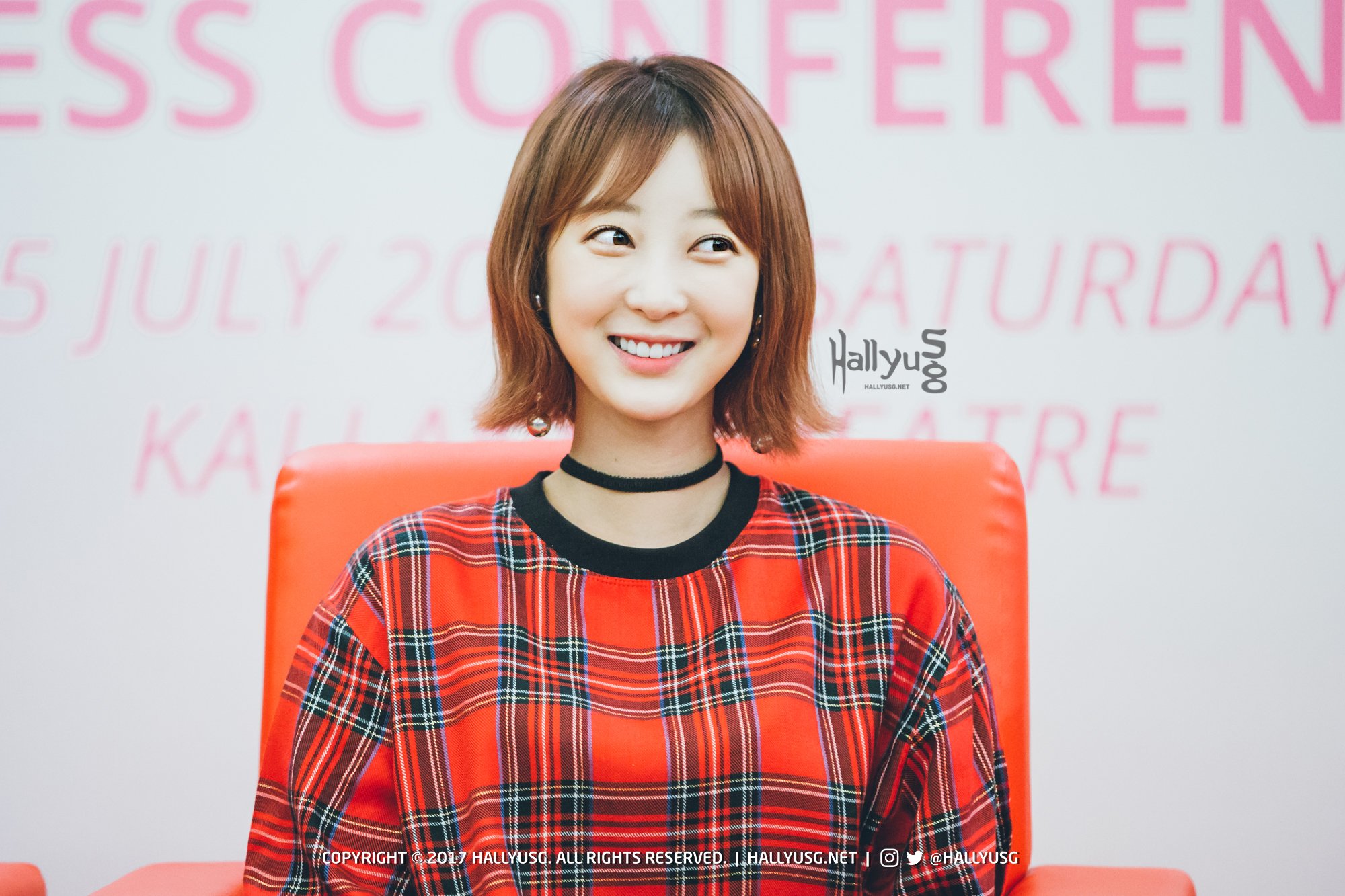 Hani also names the role that each member represents in the group, with LE being the grandmother, Hyerin as the mother and Junghwa as the daughter, adding that Hyerin is the best cook out of them.

If they could choose to eat only one type of food for the rest of their life, Hyerin would pick mackerel, while Junghwa chose her favourite ramyeon, LE with samgyetang (ginseng chicken soup) and Hani with potato chips. 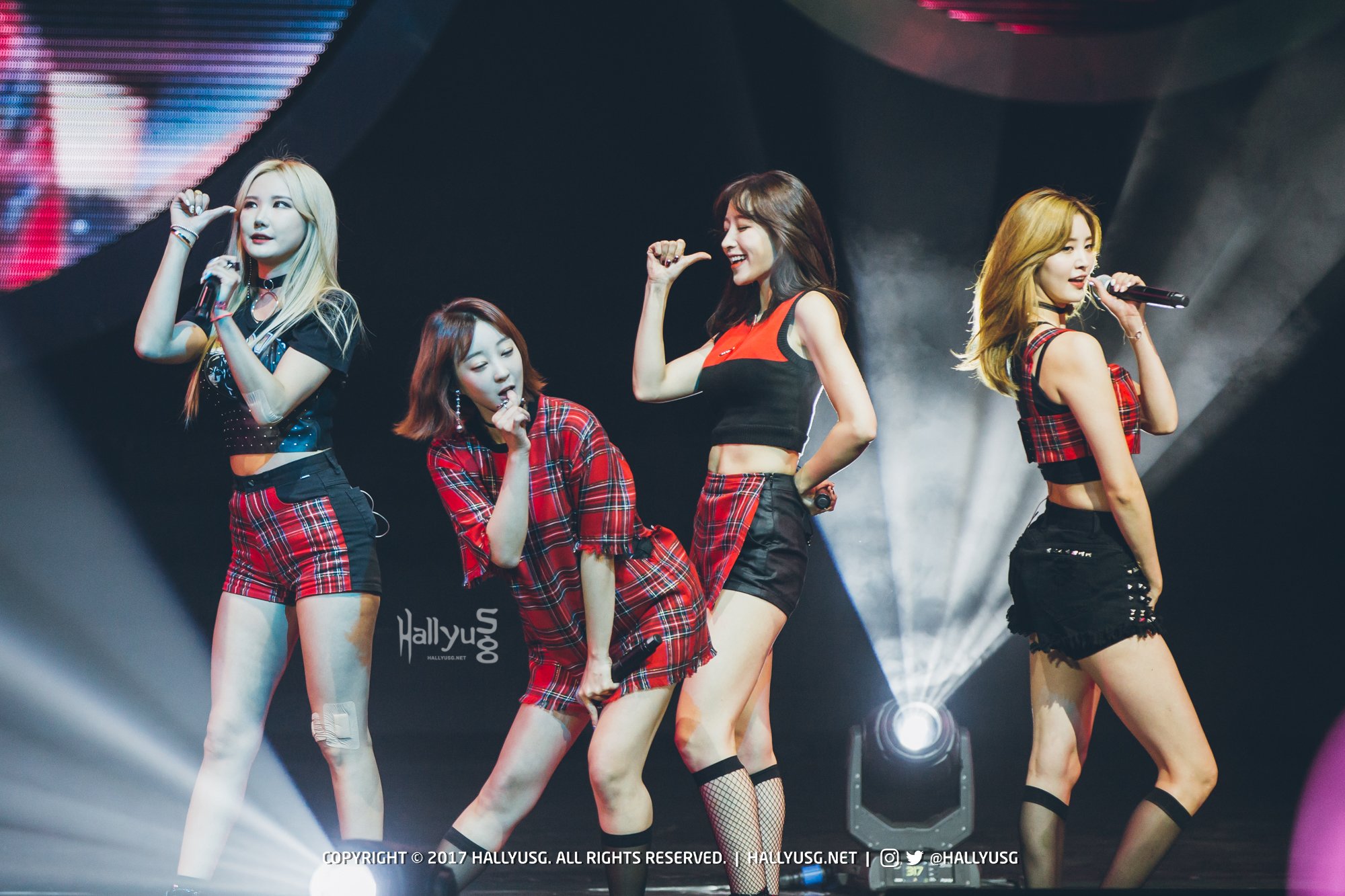 At the showcase, fans were treated to a string of EXID’s hit tracks such as ‘L.I.E‘, ‘Ah Yeah‘ and ‘Hot Pink‘. A few handful of them also walked away with autographed albums and t-shirts designed personally by the members.

Dressed in their album cover outfits, EXID took their newest title track ‘Night Rather Than Day‘ to stage, pulling off a cool and chic look. The girls also sang ‘Boy‘, where they performed a spectacular special dance segment for their fans. 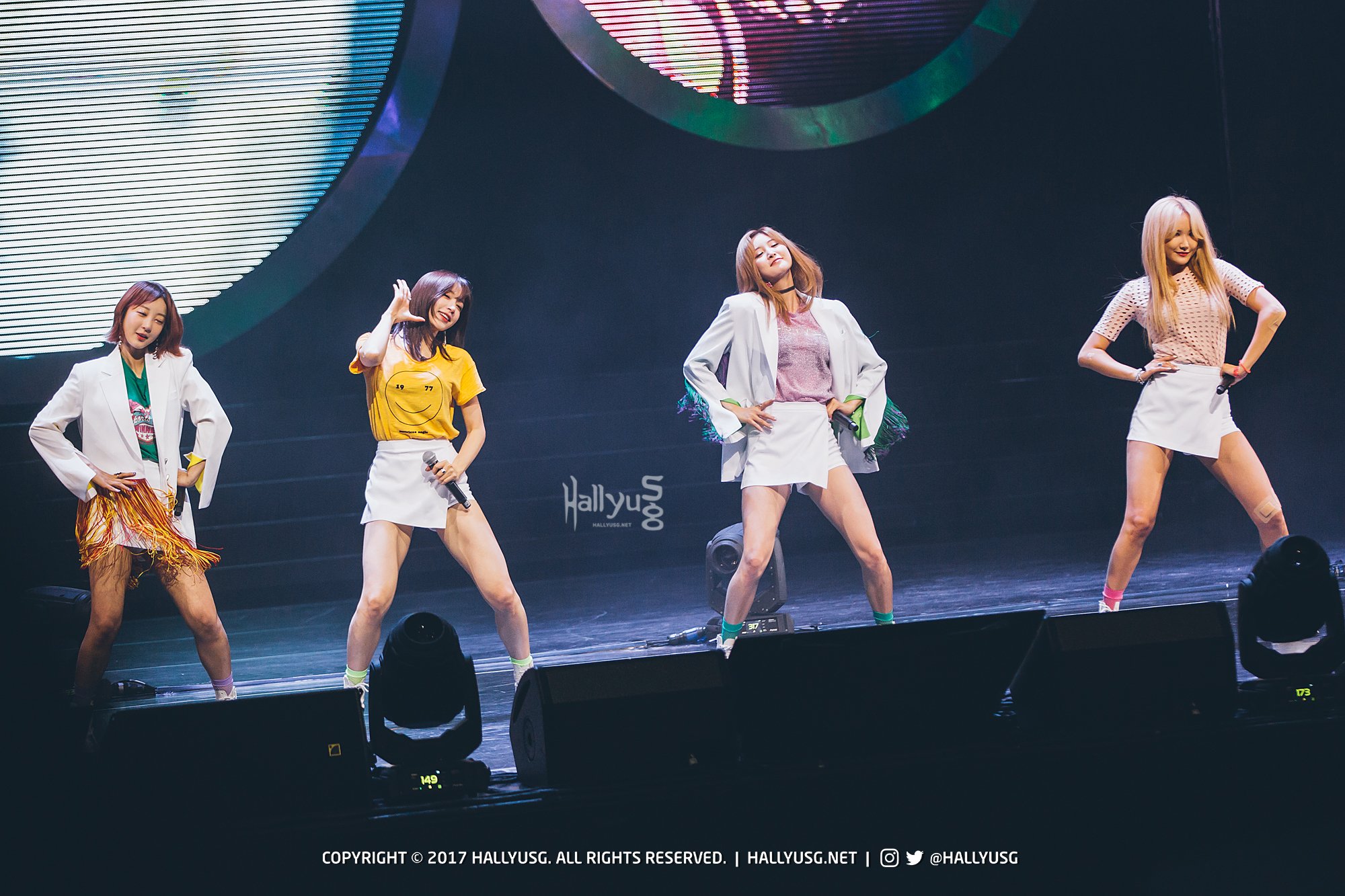 The best stage always comes at the last, as EXID drove fans into a wild frenzy with their signature dance moves for ‘Up & Down‘, the track that rose to fame after a fancam of Hani went viral in 2014. Concluding their first Asia Tour in Singapore, and definitely not the last, July 15 was certainly a memorable night to remember for all LEGGOs in the house!

EXID Asia Tour in Singapore 2017 was organised by OHMYEVENT and Only Entertainment. HallyuSG was proud to be the Official Online Media Partner for this event.