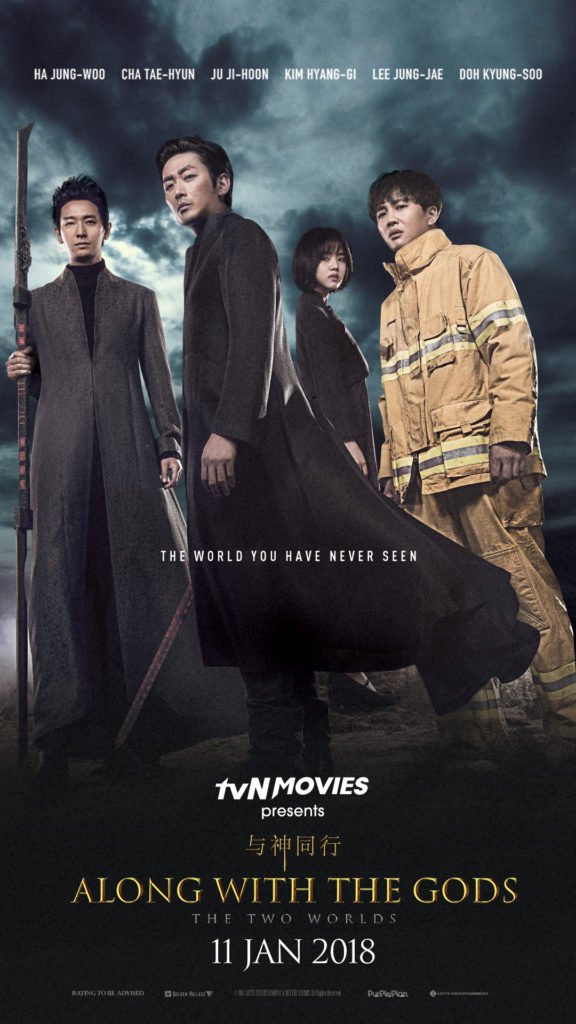 Starring an impressive lineup of cast such as Ha Jung-woo, Cha Tae-hyun, Ju Ji-hoon, Kim Hyang-gi and more, ‘Along With The Gods: The Two Worlds‘ will be coming to the big screens in Singapore on 11 January 2018.

Barely a week into its premiere in South Korea, the film has already surpassed 4 million moviegoers, beating the box office records that were previously achieved by films like ‘Ode To My Father’ and ‘Assassination’.

Having died unexpectedly at a scene of fire while trying to save a little girl, firefighter Ja-hong (Cha Tae-hyun) is taken to the purgatory by 3 Afterlife guardians – Gang-lim (Ha Jung-woo), Hewonmak (Ju Ji-hoon) and Deok-choon (Kim Hyang-gi). As the first paragon in 19 years, he must go through 7 trials over 49 days in order to be reincarnated. The 3 guardians were promised of reincarnation as well by King Yeomra (Lee Jung-jae), who rules the Afterlife, if they successfully defend 49 souls and do their best defend Ja-hong’s innocence in trials as their 48th client.

His journey progresses without a hitch, until his brother Su-hong, who died begrudgingly, has turned into a Vengeful Spirit and begins attacking the Afterlife, thereby interrupting Ja-hong’s trial. Through the course of this battle, hidden facts surrounding Su-hong’s death are uncovered and proof of Ja-hong’s innocence is now uncertain. Risking their own fate in the Afterlife, the 3 guardians fight to reincarnate both brothers.

Watch the official movie trailer above and visit our Facebook page to find out how you can win tickets to catch the special screening of Along With The Gods: The Two Worlds on 9 January 2018 before the movie opens islandwide!

[NEWS] Korea's No.1 Supernatural Thriller Movie 'THE PRIESTS' opens in Singapore next year