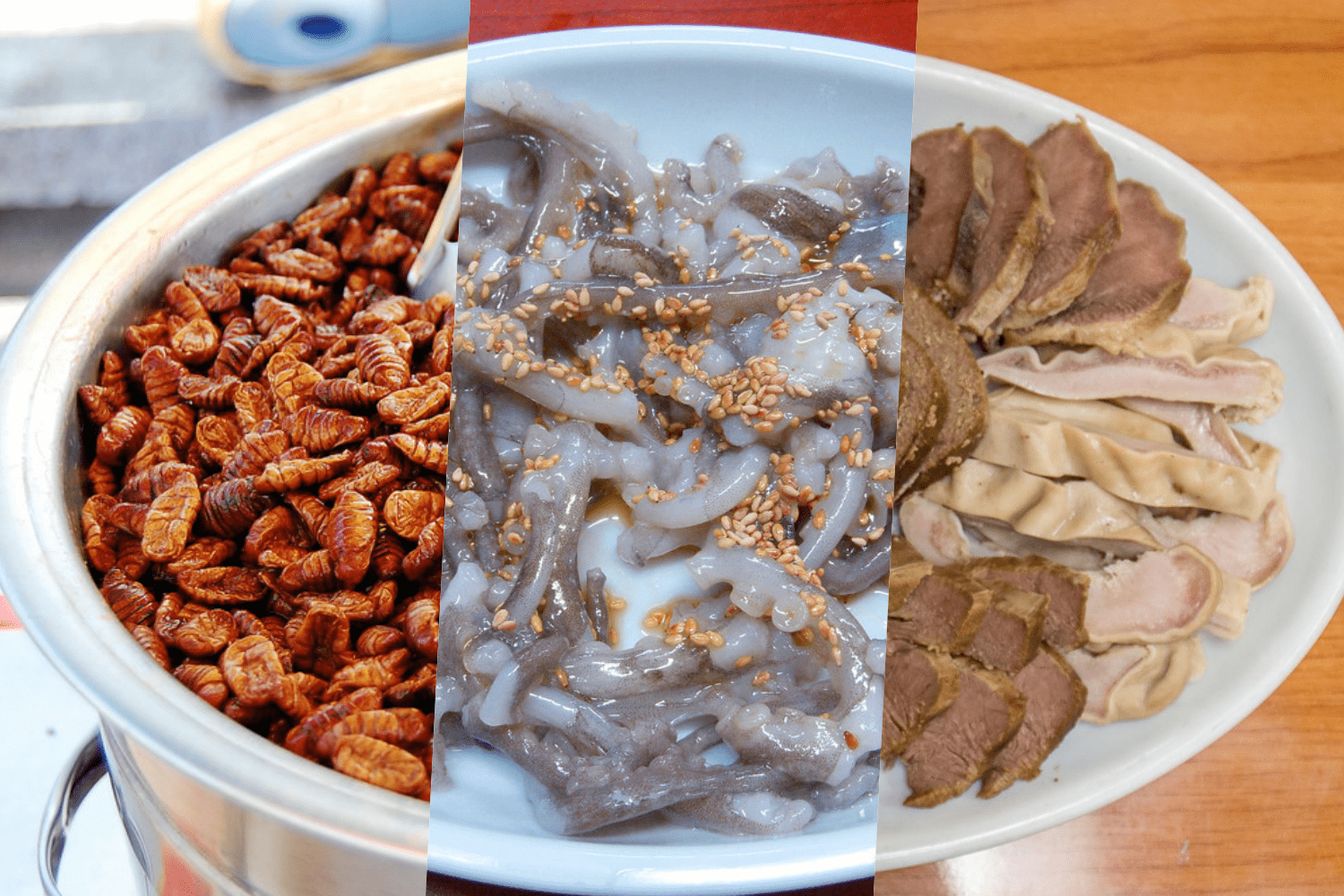 Korea has their fair share of delectable food but as you already know, every country has got to have their very own list of bizarre ones and Korea is definitely no exception. If Singapore has durian and France has blue cheese, I’m sure Korea also has a few items up their sleeves that are ready for us to try out too.

From interesting to just plain horrifying ones, your mouth and eyes are in for a crazy gastronomic adventure of a lifetime. Some of the items on this list are just too otherworldly so we’ll applaud you if you ever have the guts to try them out. Without further ado, we bring you some of Korea’s most interesting foods and we dare you to try them out:

Fermented skates are not for the faint-hearted because its gut-wrenching smell makes it difficult for even locals to even get close to it. Prior to consumption, the fish is preserved and ammonia is produced from the uric acid excreted during the process, giving it its distinctive pungent smell that is said to be reminiscent of a toilet. On top of that, it has to be eaten raw, sashimi-style so there is no way the smell can disappear.

For many, you’ll only get used to this dish after trying it out for yourself a couple of times but for the fans, it is said to go extremely well with bossam (boiled pork belly) and kimchi. So if you’re feeling a tad adventurous, how about having some for yourself someday?

If you thought Thailand was the only country that ate bugs, you are so wrong. Commonly sold by street food vendors, this delicacy might seem hard to stomach but for Koreans, this is pretty solid finger food. The silk worm pupae is a crunchy protein that is first boiled, then seasoned with soya sauce, and it is exactly how you imagined it to taste – Crunchy on the outside and soft on the inside.

Some have even said that leaves a nutty aftertaste but that is something only a person with an acquired tastebud would be able to tell. Contrary to the way it looks and smells, it is a relatively popular snack, so much so that it has its owned canned version that is being sold in convenience stores country-wide.

One of the less frightening dishes on the list is the live octopus. Straight out of the water, gutted, then cut into bite-sized pieces, and freshly served with a splash of sesame oil and seeds, this is a dish enjoyed by many. Once they get over the fact that the tentacles are “moving” of course. And no, there are not writhing because they’re alive but because their nerves are still functioning. However, despite its terrifying movements, many have said that this dish is really delicious thanks to its natural sweetness and bounce.

Try it if you dare and if you’re up for a bigger challenge, you can opt to eat a whole live octopus. Though I really wouldn’t recommend it with all the health risks and hazards it poses!

This delicacy is what nightmares are made up off. Often casually referred to as the “p***s fish”, this marine animal strikes a grotesque resemblance to a certain body part but it certainly taste less weird than it looks! Boasting a very unique mouthfeel and texture, the spoon worm is commonly found in wet markets and served fresh with a side of vinegar-ed gochujang for that extra oomph.

Although it is available all year round, it is said to be the sweetest from December to March, so if you’re planning to visit the markets anytime soon, remember to keep a lookout for a plump and thick piece because those are indications of the highest quality.

To enjoy this famous street snack, you must first forget that it is made out of pig’s blood. Although blood is an ingredient commonly found in some of the world’s greatest cuisines, there are still some people out there who gets grossed out with its usage but don’t let that deter you because the soondae is said to be an enjoyable and common dish for people of all ages.

Unlike your regular sausage, the Korean blood sausage is usually made out of blood (of course), noodles, meat, and vegetables, all mixed and stuffed into an intestine before it is being steamed and/or fried to be served. After cooking, not only is it tender and soft to the touch, it is juicy and flavorful. The next time you visit a street food stand, don’t forget to try this hearty dish out for yourself.