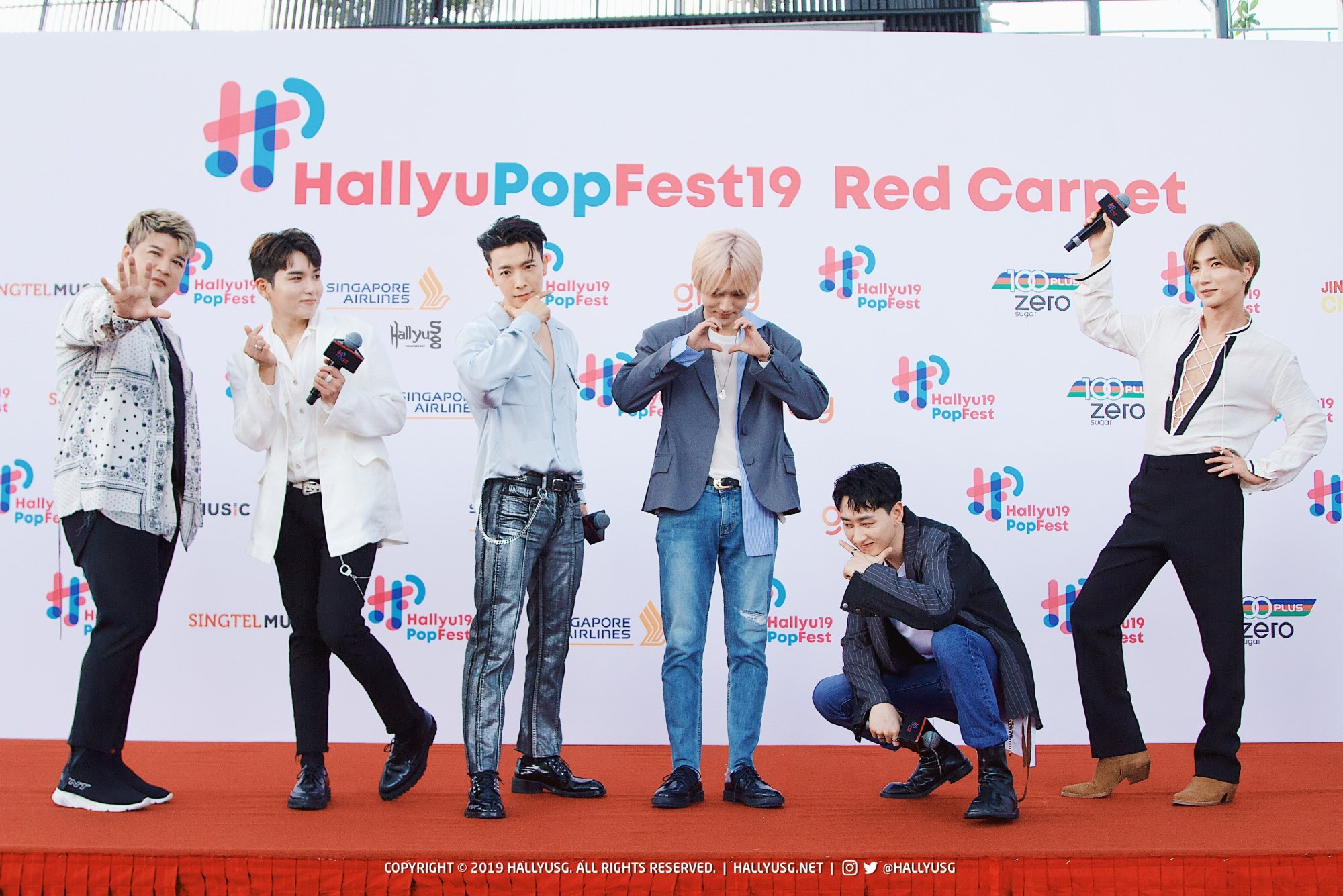 Held over the past weekend (May 25-26) to much fanfare, HallyuPopFest returned to stage at the Singapore Indoor Stadium, 8 months after their inaugural festival in Singapore last year. This year’s 2-day festival saw headlining acts such as Super Junior, WINNER, MONSTA X and NU’EST, as well as a fan-favourite lineup which included Hyolyn, KARD, PENTAGON, (G)I-DLE, and more. 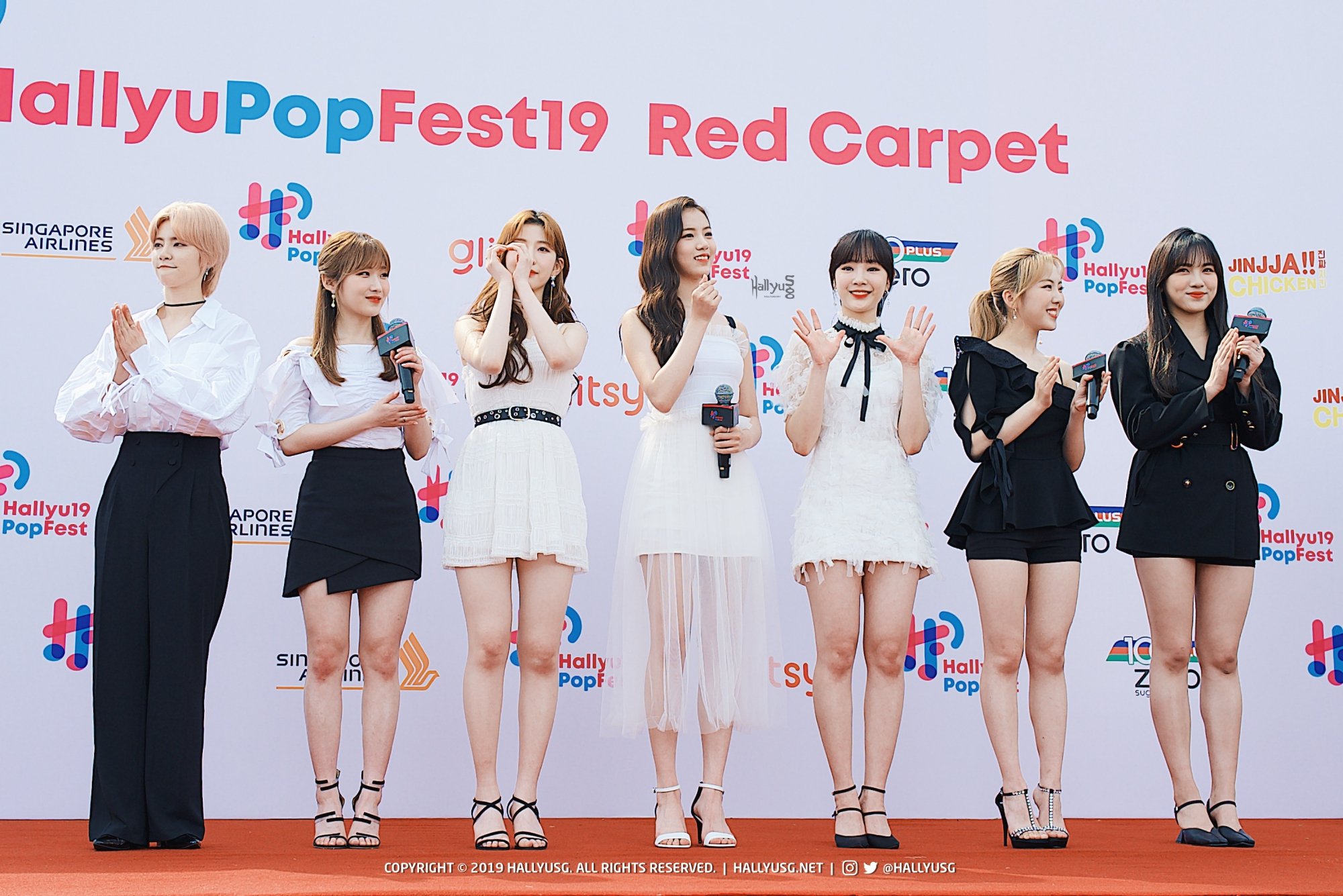 First time in Singapore, up-and-coming girl group GWSN made their way to the red carpet right after the afternoon showcase on the first day of the festival. As newcomers in the K-pop scene, GWSN names Girls’ Generation as their role models, and even did a dance cover of TWICE’s ‘TT’ upon request, inviting cheers from all corners.

The 7-member girl group also conveyed their wishes to take on a powerful and energetic concept for their comeback in the near future. 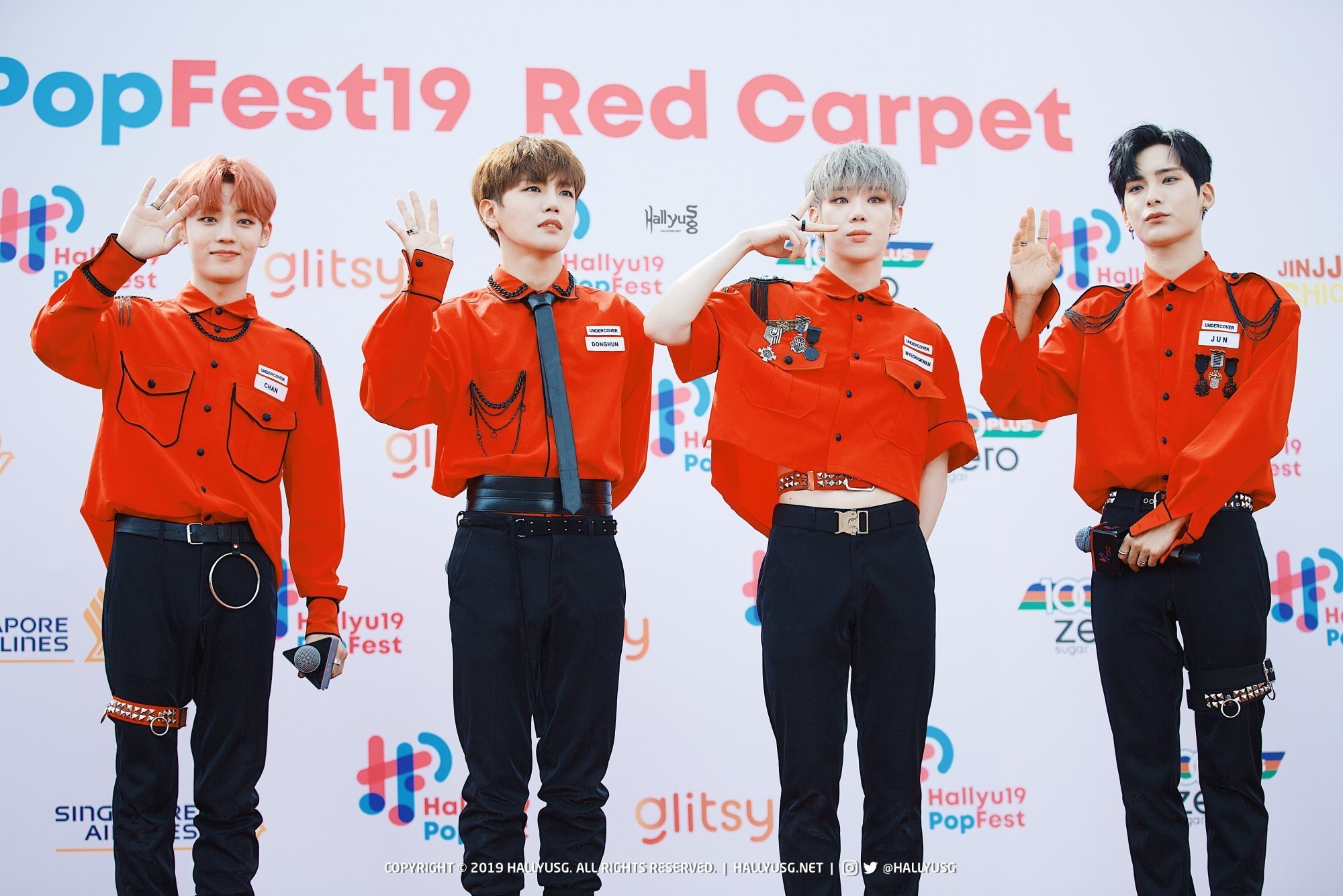 Back in town for HallyuPopFest, this trip marked A.C.E’s third visit here and the members mentioned Sentosa and Merlion Park as the places they hope to visit if they could have a free day to explore Singapore.

Having travelled around the world to meet their international fans, A.C.E describes music as a universal language for everyone, and added that they were able to feel the energy and communication with their fans through music even though they may not speak the same language together. 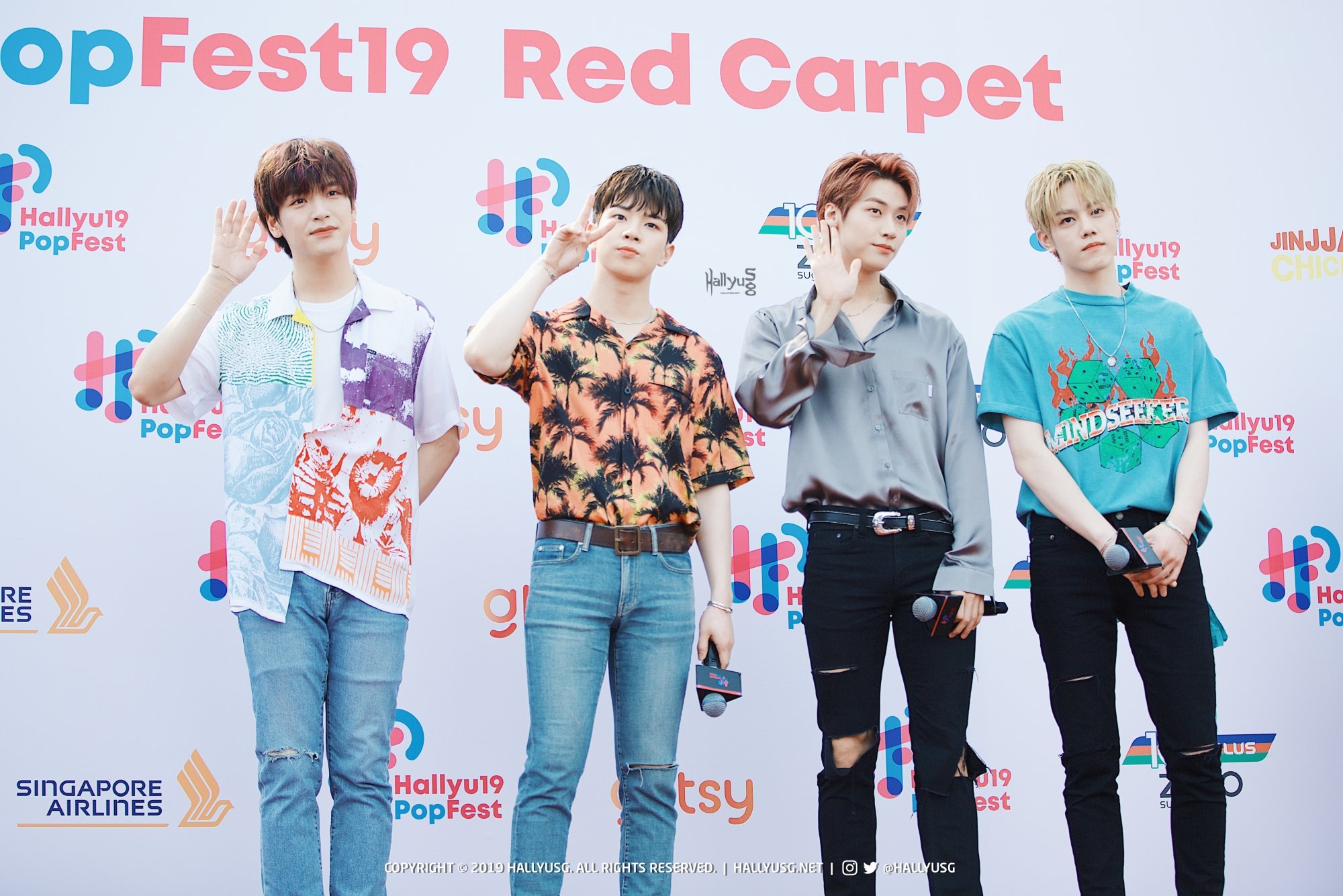 The first act to kick off Day 1’s evening concert, N.Flying sent fans into a fit of roaring cheers when they performed their hit tracks “HOW R U TODAY”, “Rooftop” and more.

At the red carpet, the group recounted their reactions when they first found out that “Rooftop” charted at the top on the music charts. Describing it as a surreal feeling that they’re never experienced before, the members shared that they could still feel the nervousness and excitement from that very day, as they thanked fans once more for their love and support. 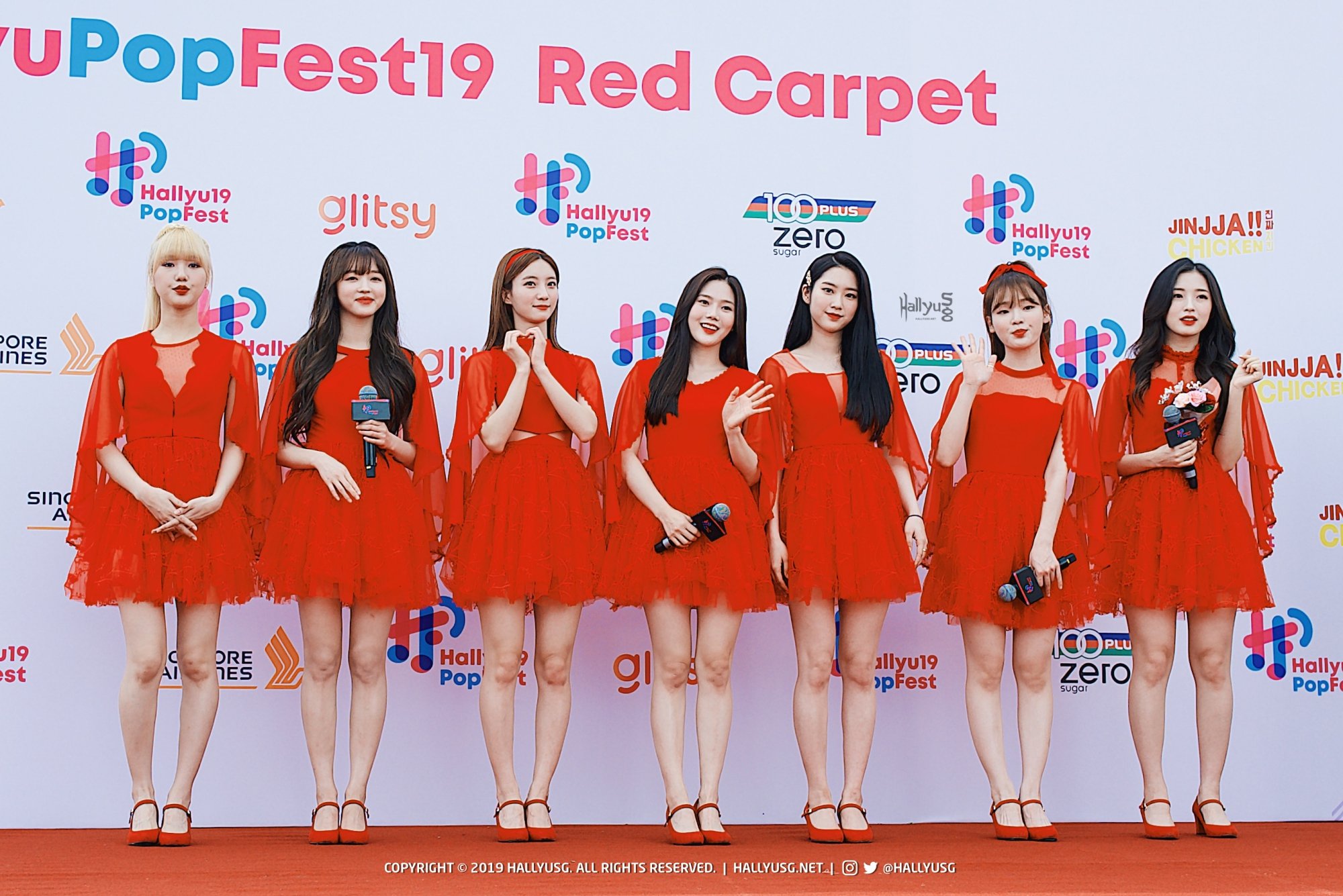 Dressed in bright red for the red carpet and concert, Oh My Girl sent hearts aflutter with several of their hit numbers that evening, including “Secret Garden”, “Liar Liar”, and their latest comeback track “The Fifth Season”.

Having tried various genres and concepts for their first full length album in 4 years, Oh My Girl revealed that they hope to take on a retro and powerful concept for their next comeback, and would love to release an upbeat and lively song to welcome the approaching summer. 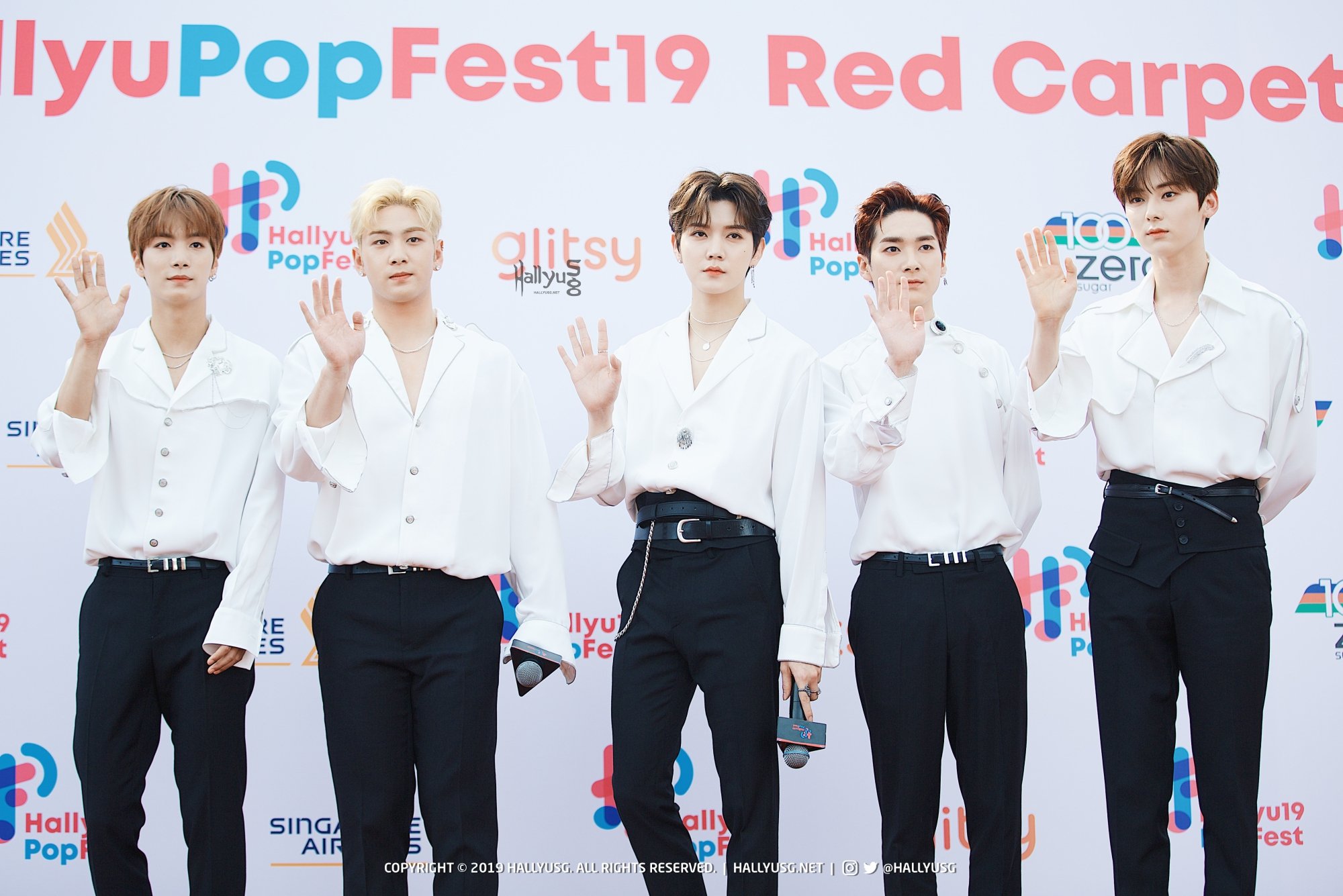 One of the most anticipated groups for HallyuPopFest, NU’EST returned to Singapore as a full force and the wait for them was definitely worthwhile as fans were treated to hot performances at the concert, such as “Hello”, “Segno”, “Bet Bet”, and more.

On what fans will be able to look forward this year, Baekho answered that it has been awhile since the 5 of them gathered as a group, so instead of rushing things out, he hoped that fans could anticipate and watch them grow further. Minhyun added that being able to show their stages and performances is their definition of happiness, and they were glad that they could visit Singapore and perform for the fans.

In related news, NU’EST will be returning very soon for their own concert this August and this will mark their first full-scale concert in Singapore since their last L.O.Λ.E Tour in 2013. 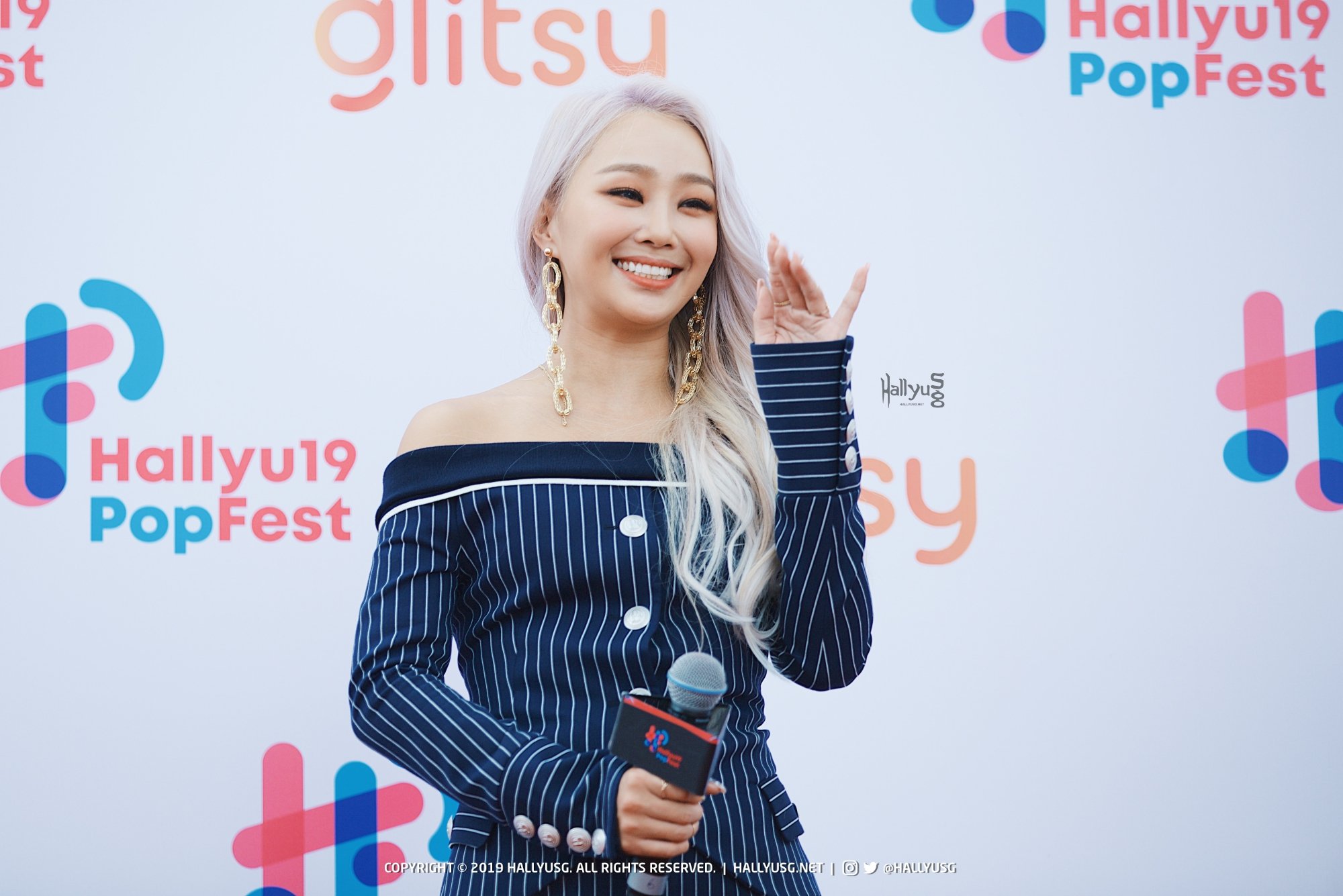 The vocal queen of all genres, Hyolyn treated fans to a power-packed setlist at the concert, as she dominated the stage with all-time hits “Dally”, “SEE SEA”, “Paradise”, as well as a special medley of SISTAR songs.

At the red carpet event, the female powerhouse declared her love for Singaporean food, naming Chilli crabs as one of the must-have dishes whenever she makes a visit here. Hyolyn also named American rapper and songwriter Cardi B as one of the artistes whom she looks up to and hopes to collaborate with if there’s an opportunity in the future. 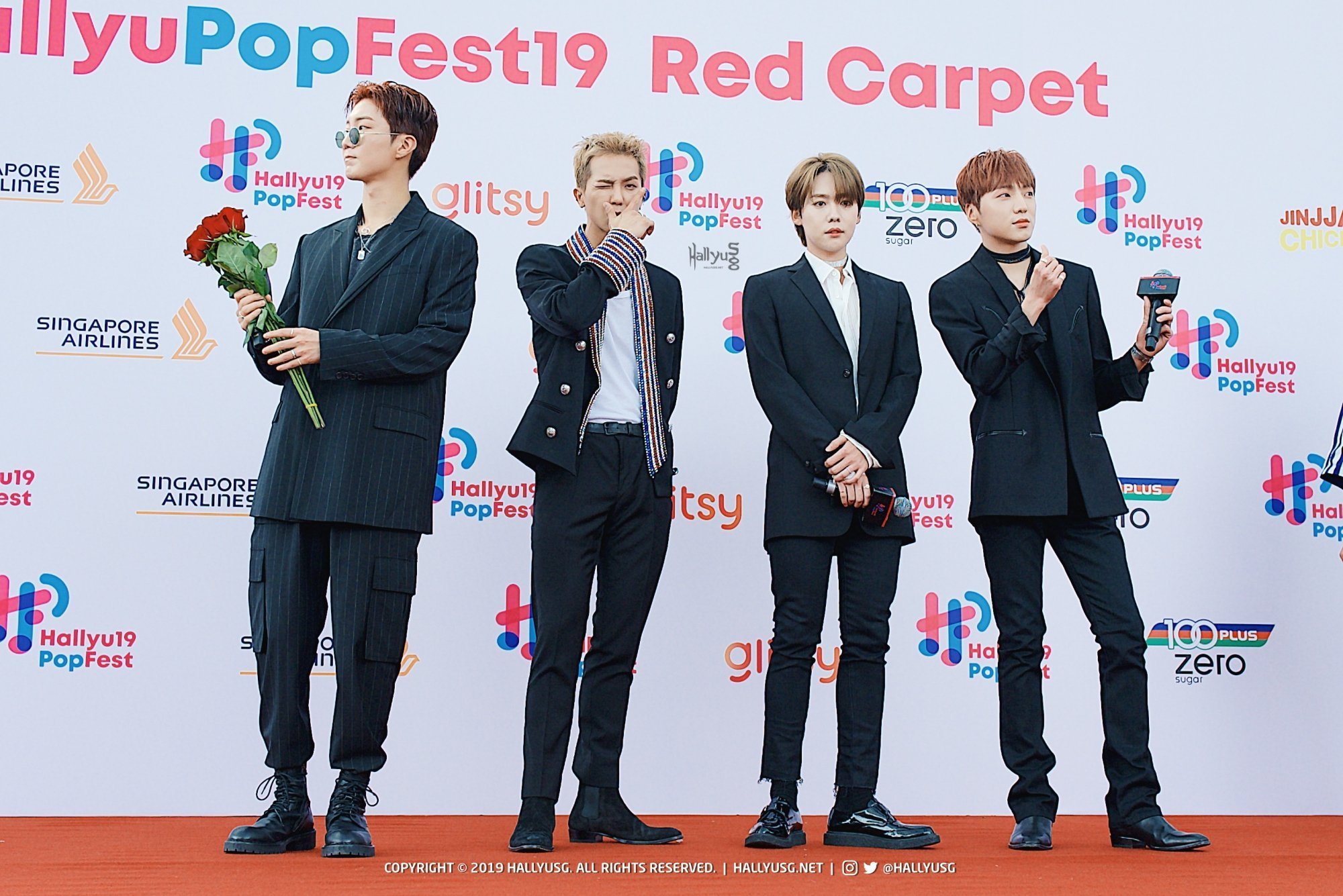 Finally, the headlining act of Day 1’s evening concert, WINNER got everyone in the crowd cheering and screaming at their loudest the moment they walked the red carpet. Back in town 6 months after their solo concert, members talked about having fond memories of Singapore whenever they visit.

WINNER also shared their source of inspiration that goes into their album making, stating “Whenever we produce music, we think of our fans and us singing out loud to it. That’s how our music came about.”

It was a complete party later at the concert as WINNER drove fans into a new high with their hit songs one after another. From their debut song “Empty” to their classic and latest hits “AH YEAH”, “MILLIONS”, “REALLY REALLY” and more, they ended the concert on an incredibly explosive note, leaving fans screaming for more. 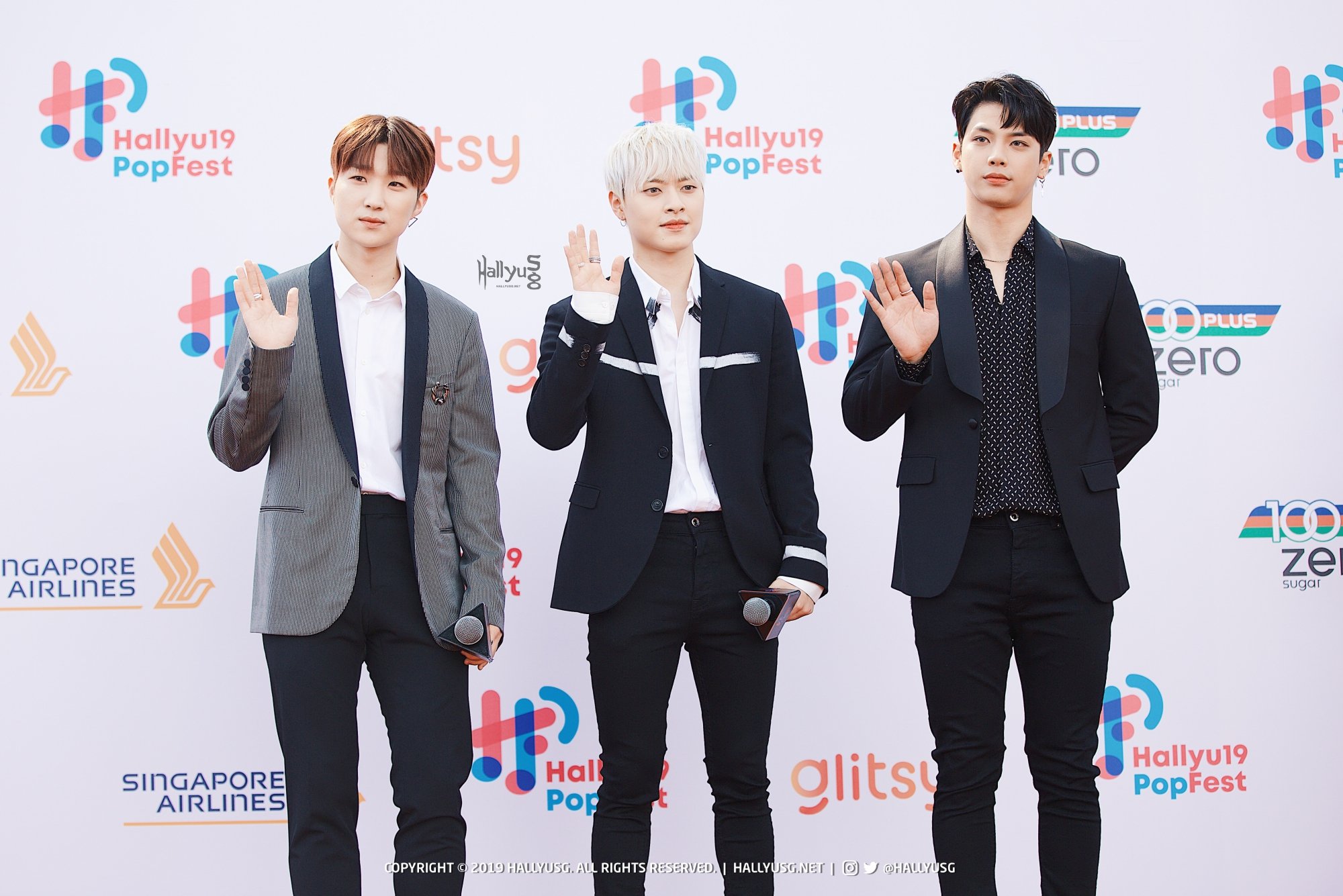 The second day of HallyuPopFest began with the afternoon showcase, which was led by up-and-coming artistes TREI, Kanto, and VERIVERY.

3-member idol group TREI, was the first group to make an entrance on the red carpet, as the trio greeted fans in their biggest enthusiasm and talked about their desire to return to Singapore for a concert in the near future.

As self-producing idols, TREI shared that their fans were the source of inspiration when they make music. Even though it has only been 3 months since their debut, they would like to do a collaboration with other artistes in the future when the opportunity arises. 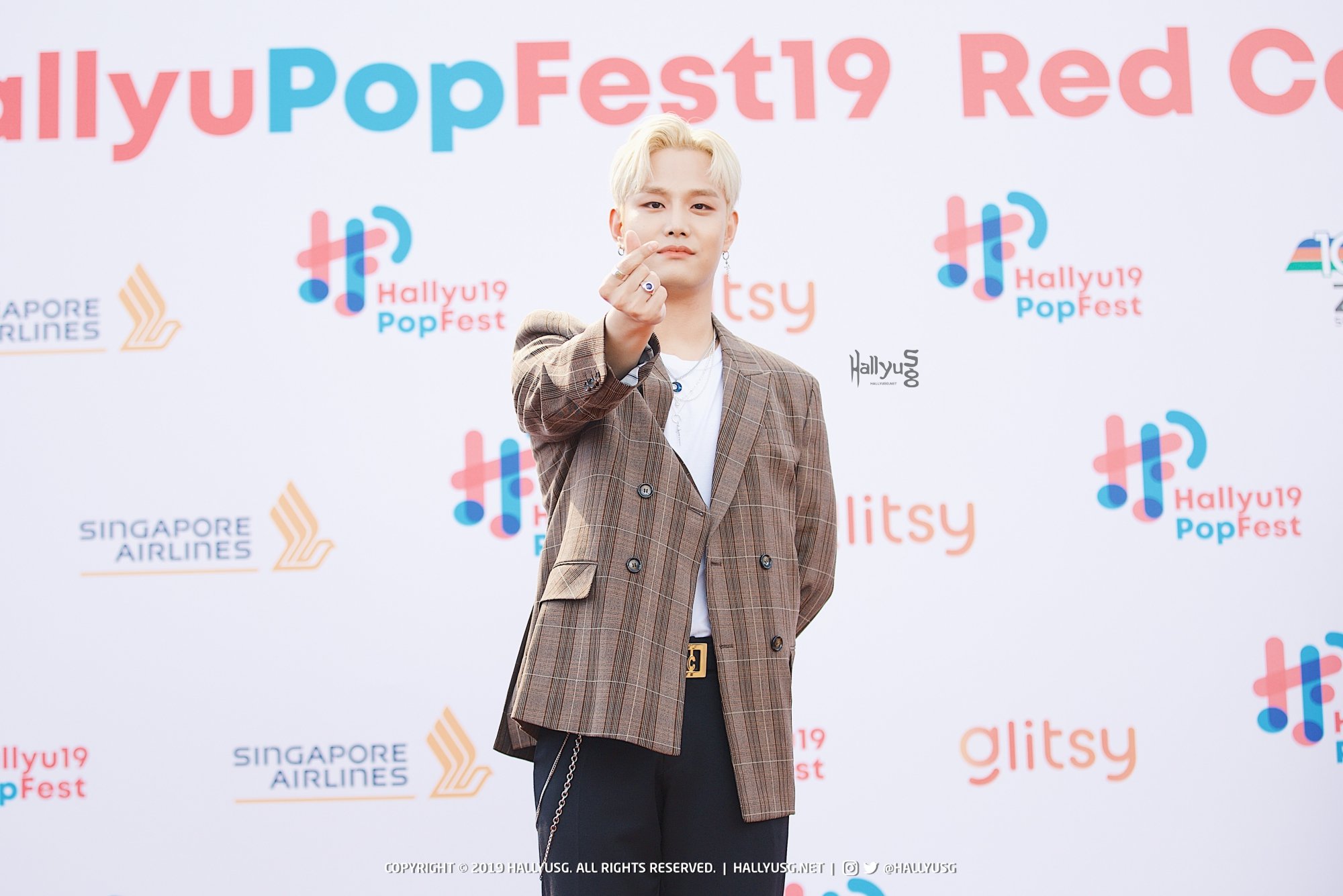 Rapper Kanto was next on the red carpet, drawing attention as he walked in style and made his way to the stage in all smiles.

On his upcoming plans for the second half of the year, Kanto revealed that he’d be busy with performances all throughout summer. He also added that he had been preparing for a collaboration track by himself, naming NU’EST Baekho and A.C.E Chan as the ones he hopes to join forces and work with. 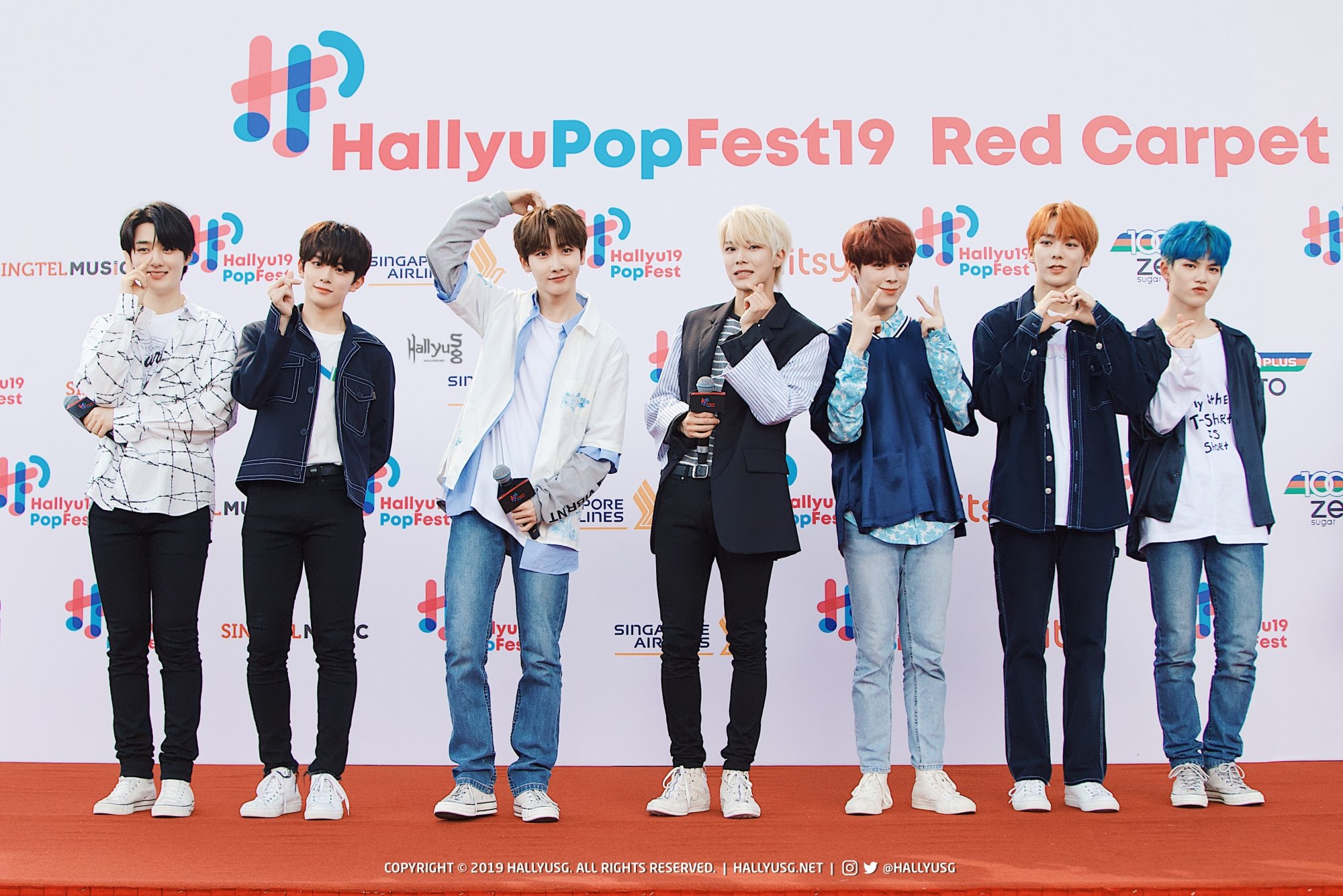 Shortly after, VERIVERY took the red carpet stage and greeted fans in all corners with their trademark introduction. The 7-member boy group from Jellyfish Entertainment shared that their goal for 2019 is to receive a rookie award at the end of the year, as they promised to work harder to show a better and improved version of themselves for the next album. 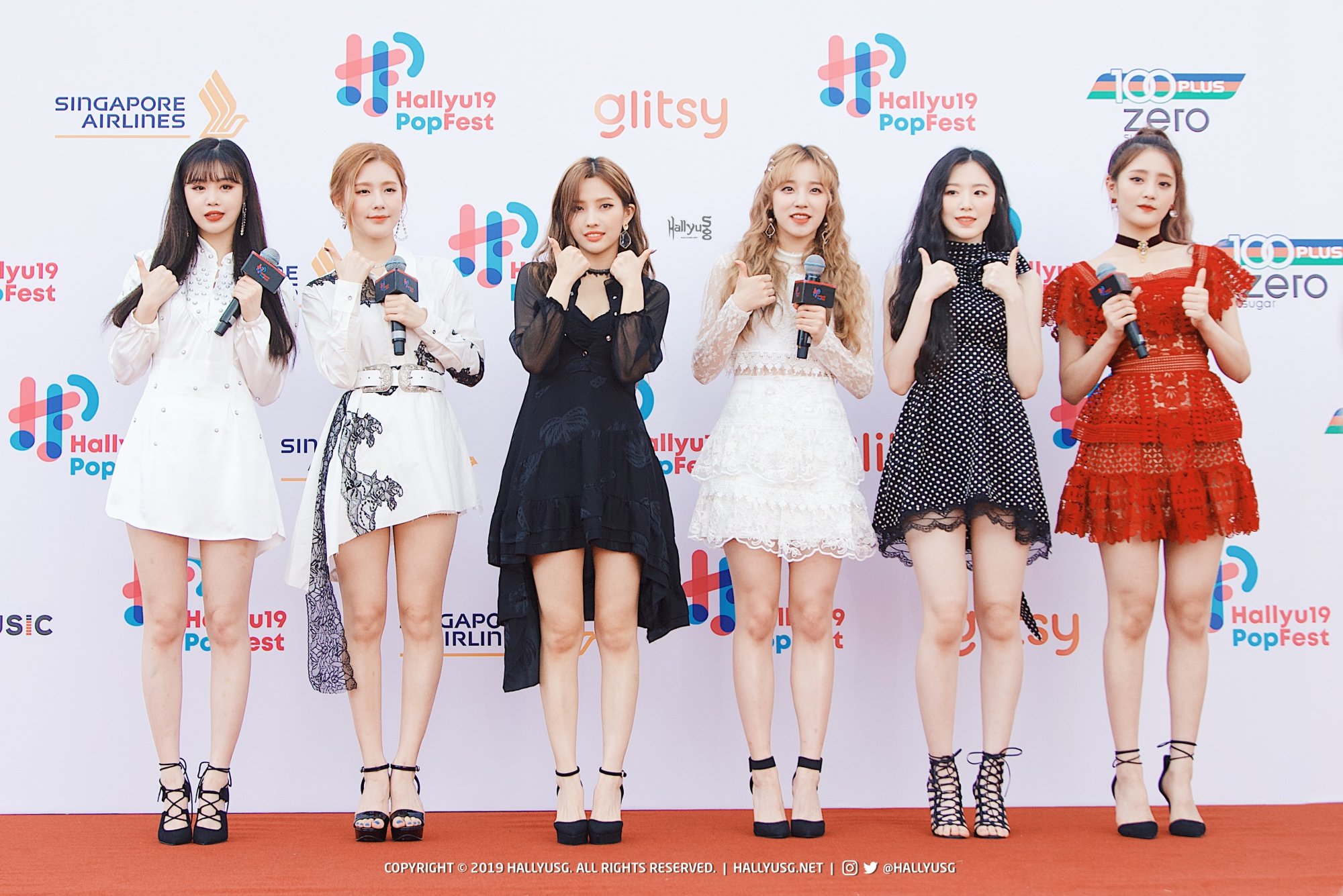 The opening act of Day 2’s evening concert, (G)I-DLE made an appearance at the red carpet and shared their excitement of being in Singapore to perform for the fans.

Prior to their debut, they have visited Singapore for an album jacket photoshoot, where member Yuqi recalled about the bungee jumping experience they had at Sentosa, exclaiming that it was one of their fondest memories in Singapore.

The girl crush group also discussed on what they hope to achieve by the end of this year, which is to top the music charts with their new album.

During the concert, they showed off their charismatic charms with powerful songs like “MAZE”, “HANN”, and their highly well-received debut track, “LATATA”. 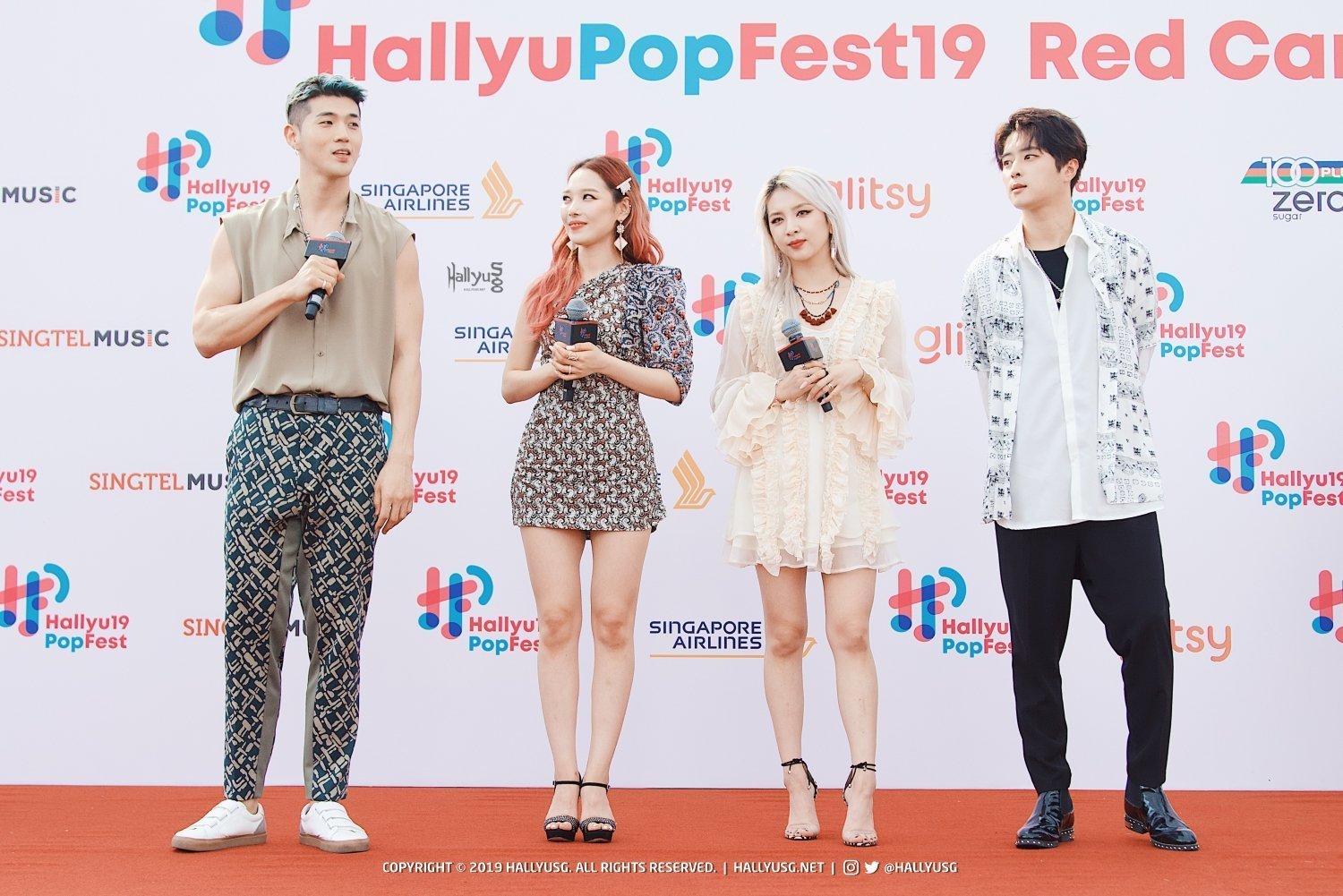 Another fan-favourite act of HallyuPopFest, KARD candidly talked about switching parts of their song with another member and as usual, fans were able to see their great chemistry with one another even when they’re not performing.

J.Seph picked Jiwoo’s part, explaining that she gives off a great impact and a lot of energy when she sings. On the other hand, Jiwoo chose B.M and said she don’t mind trying out his rap part someday.

Although they do not have any fixed plans next, KARD hopes to greet fans with another album as soon as they can, and in the meantime, they will be working hard towards achieving this goal.

Also the only co-ed group to grace the festival, KARD pumped up the crowd at the concert with their incredible energy and addictive tracks such as “Oh NaNa”, “Don’t Recall” and “Bomb Bomb”, which had everyone singing along! 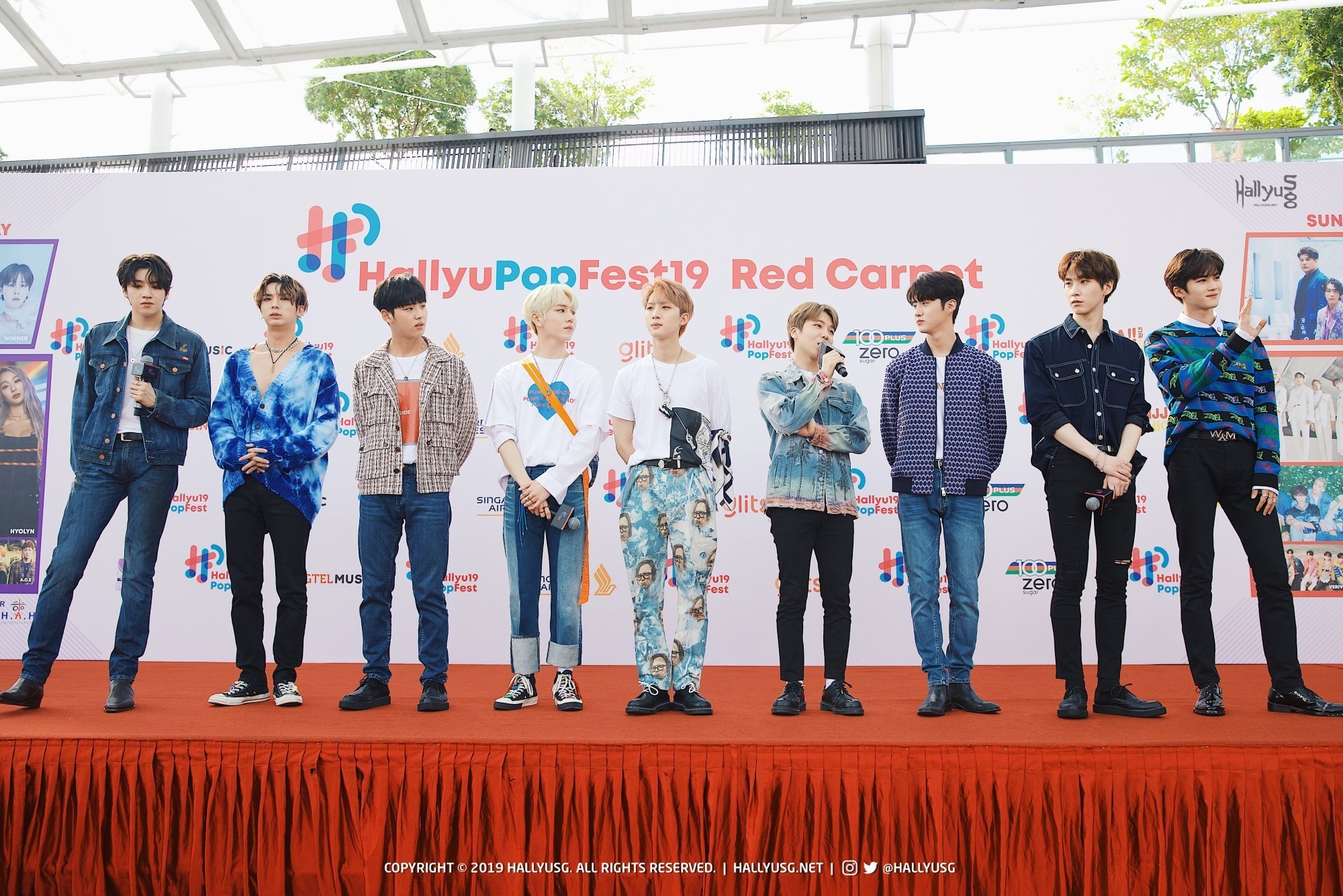 Set to return this November for their very own World Tour, PENTAGON revealed that Singapore will be their last destination for the tour and they are looking forward to deliver hot performances for the fans.

When asked which member is most different on and off stage, a majority of the members picked Wooseok, to which Hongseok explained, “Off the stage, he (Wooseok) is a really fun guy with a sense of humour, but on stage he’s so serious and unfunny.”

PENTAGON was the third artiste to take the stage during the concert and they treated fans to a setlist that comprised songs of a variety of genres. These included the feel-good “Shine”, the mellow and sweet “Violet”, as well as the bold and slightly retro “Critical Beauty”. 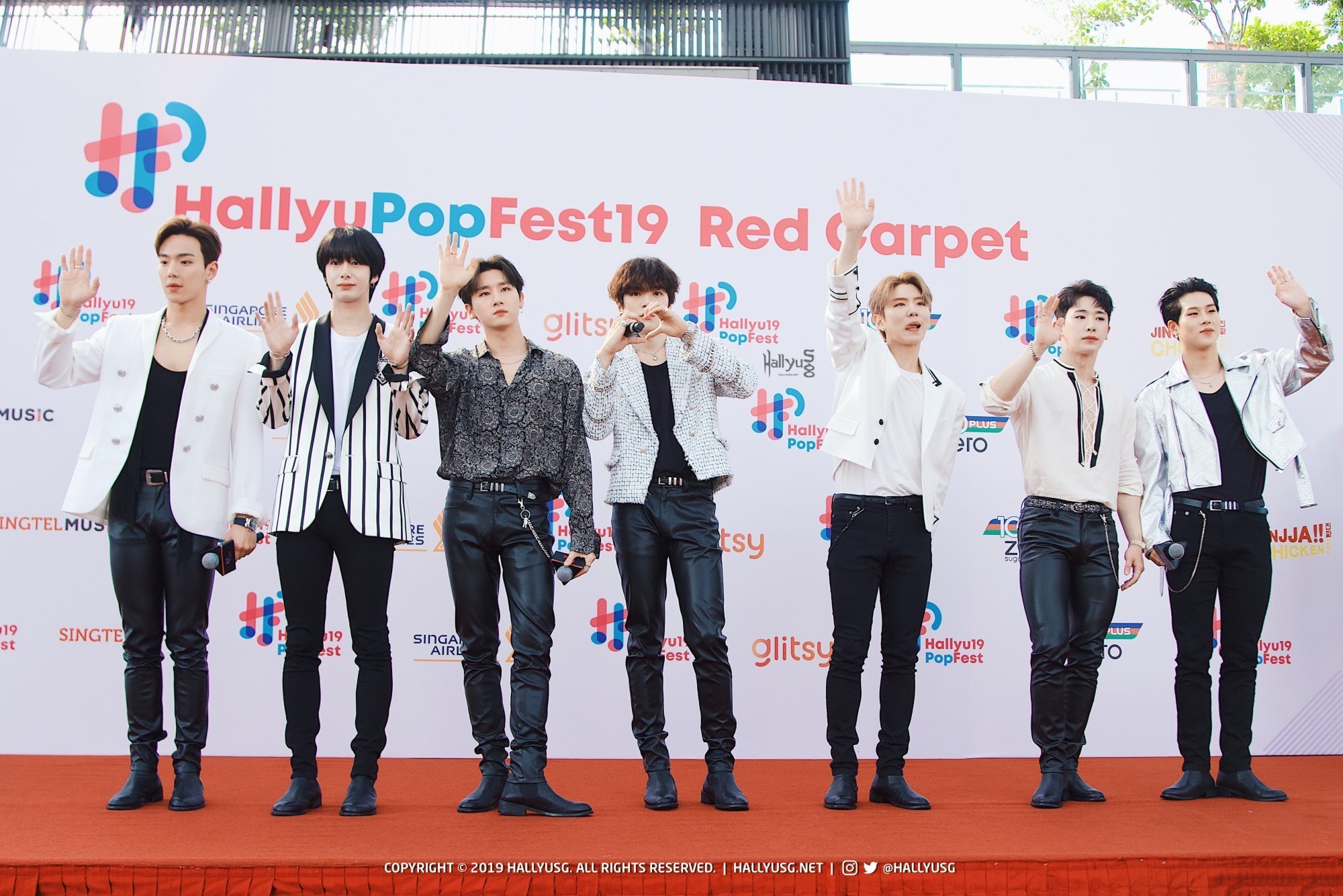 MONSTA X played it cool wherever they go. Treating fans to their best hits that evening, the group performed high energy tracks that were representative of their unique and strong style, such as “DRAMARAMA”, “Alligator” and “From Zero”. During their performance of “Need U’, they even went around the stadium to get up-close with fans!

Even though Jooheon and I.M filmed their mixtape MV “Be My Friend” in Singapore previously, the group hoped to shoot another one here again if they could travel overseas for an MV shoot. And if there’s an opportunity, Shownu added that he would love to try a variety of Singaporean dishes for his Mukbang broadcast in the future. 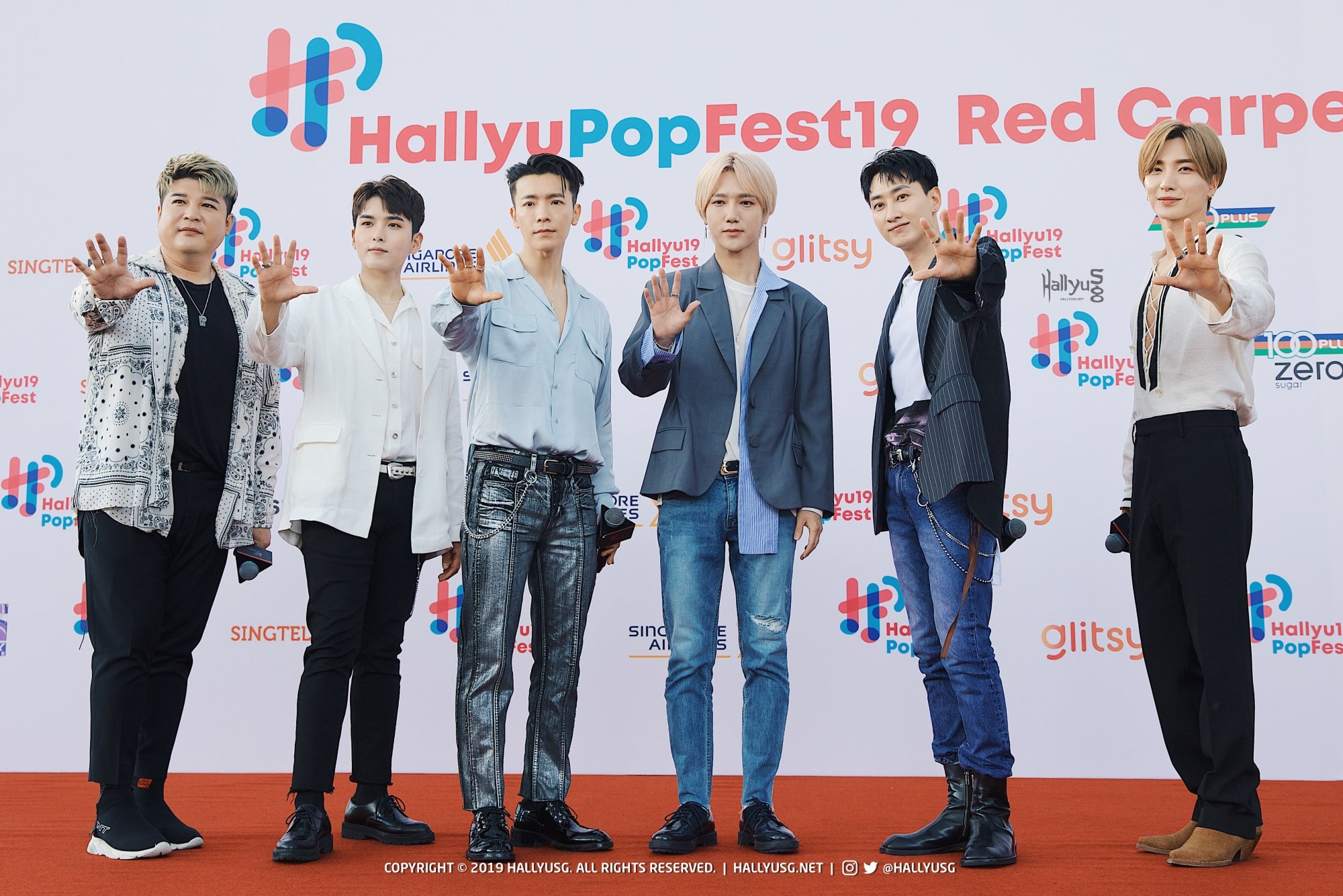 The Kings of K-Pop, Super Junior was the finale act of the night and they truly ended HallyuPopFest 2019 with a bang as they performed classic hits such as “Sorry Sorry”, “Bonamana”, “One More Chance”, “Miracle”, and even surprised fans with special solo stages by Yesung and Ryeowook, as well as a unit stage by Super Junior D&E!

When asked what’s their secret to maintaining a great teamwork, Leeteuk says, “There’s no particular secret. We’ve spent a long time together, so we think of ourselves and our fans as a family.”

Adding that Kyuhyun has officially completed his mandatory military service, they are looking forward to release a new album together as a team in the later half of this year.

For the concertgoers who attended the festival and were treated to a K-pop packed weekend, HallyuPopFest 2019 definitely wrapped up on a memorable note.