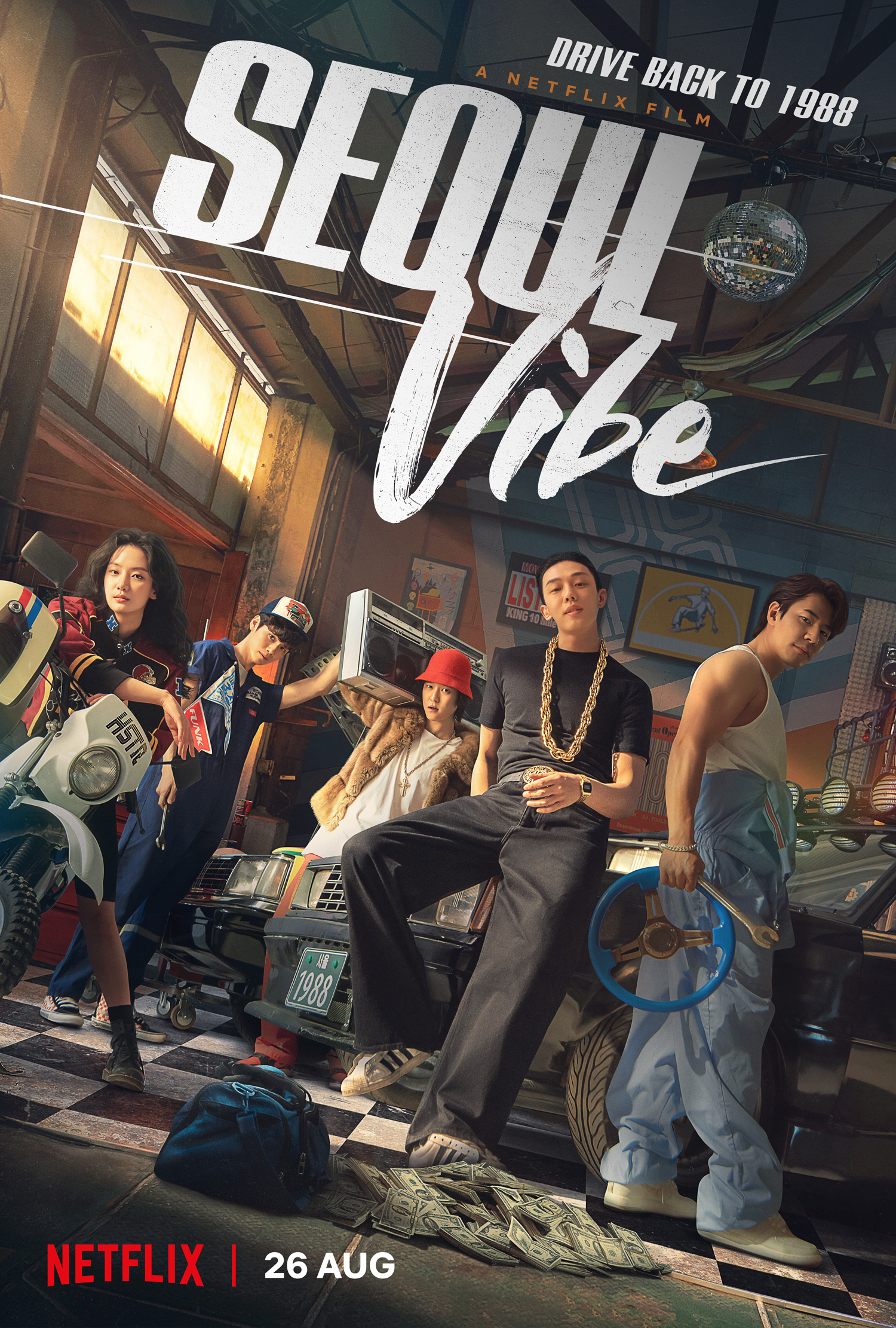 Seoul Vibe is a car action blockbuster that will be globally released on Netflix this coming August 26th. Boasting a stellar line-up of cast featuring Yoo Ah-in, Park Ju-hyun, Go Kyung-pyo, Lee Kyu-hyung and Ong Seong-wu, who made up the “Sanggye-dong Supreme Team”, this movie is set in the year 1988 and revolves around the investigation of a VIP’s slush fund.

This crew is named the “Sanggye-dong Supreme Team” for a reason. The team consists of the best drifter Dong-wook (Yoo Ah-in), the sentimental DJ John Woo (Go Kyung-pyo), human navigator Bok-nam (Lee Kyu-hyung), versatile biker and president of the National Bike Association Yoon-hee (Park Ju-hyun), and the quintessential genius mechanic Joon-gi (Ong Seong-wu), who is also the youngest of them all.

Each of them play a critical role in the team as they go up against the main money mover General Manager Lee (Kim Sung-kyun), and the right hand of the VIP President Kang (Moon So-ri). Joining this Supreme team will be Prosecutor Ahn (Oh Jung-se), who will carry on the informal investigation under the supervision of the Chief Prosecutor (Jung Woong-in). 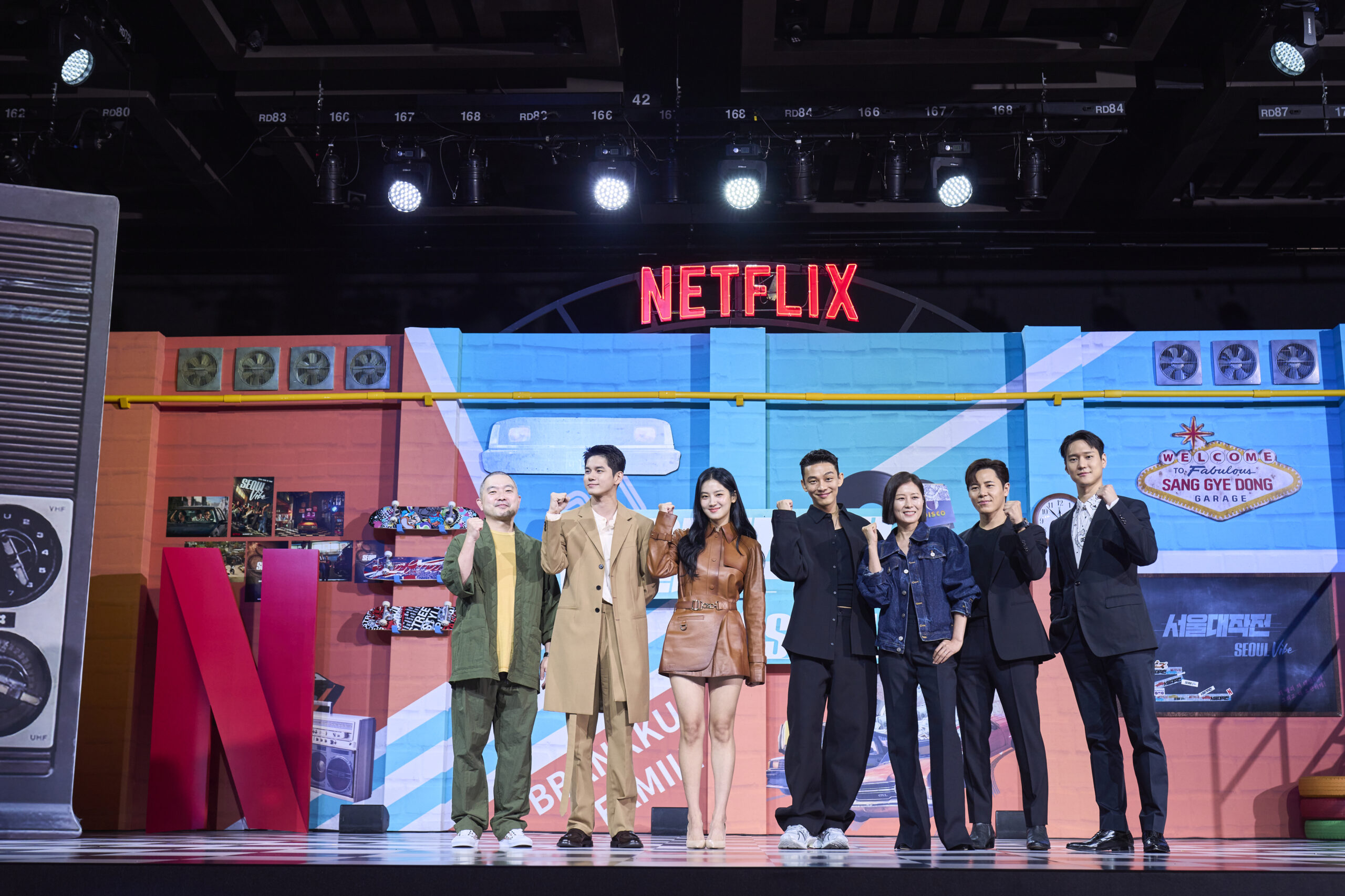 Speaking at the press conference for Seoul Vibe, all five actors of the Supreme Team expressed that the cast was one of the biggest reasons on why they chose to star in this movie.

“When I was reading the script, I was thrilled and hyped up. This is like a dream come true for me. And when I learned of the perfect ensemble of cast, there was no reason not to take up this film. I wanted to become close friends with them even before we film the movie.” — Ong Seong-wu

Recreating the 1988 Seoul vibes was revealed to be the biggest challenge for Director Moon Hyun-sung, as he’d wanted to create a unique, yet charming concept that could fit in. In this movie, audiences can look forward to seeing classic vehicles from 1988 together with trendy contemporary music, which featured musicians like Mino, DJ Soulscape, and hip-hop artist Gaeko.

The fashion of the actors is also something to look out for in Seoul Vibe. The chunky golden necklaces, the old school hip-hop hairstyles and look, and the bright and colourful outfits.

Commenting on his character’s fashion in the movie, Yoo Ah-in says, “Dong-wook is very trend-conscious and pretentious, he loves the extra influence from the West and he has fantasies about the Western world. All black is a classic, it looks very chic actually, but I thought about putting on the huge and chunky golden necklace to show how ostentatious Dong-wook is. In the eyes of Dong-wook, it looks very chic.”

From popping visuals and music to the unique setting revolving around the 1988 Korean Olympics, Seoul Vibe will be available to watch globally on August 26th, only on Netflix.

“I hope watching this film blows away the summer heat for you, and that you’ll have a great time enjoying the movie. For those who have never experienced the year 1988, I hope you get to experience a bit of nostalgia back in those days.” — Yoo Ah-in